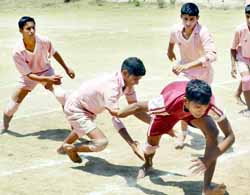 Excelsior Sports Correspondent
JAMMU, May 30: Jammu district boys outclassed district Samba by 11 points (40-29) in the summit clash and won the Under-17 boys kabaddi title in the Divisional Level Inter-District Kabaddi Tournament, which concluded at Youth Hostel Nagrota ground, here today.
The Under-14 boys kabaddi title went to district Rajouri, which defeated Poonch in the title clash.
SS Bali, Deputy Director Youth Services and Sports, Jammu and Chairman of organizing committee was the chief guest on the occasion, who later-on distributed prizes among the winners and runners-up teams.
While speaking, Bali said that sports and games serve for delight, for ornament and for agility.
Earlier, in Under-17 boys semifinals, Samba drubbed Doda by 18 points (40-22), while Jammu trounced Udhampur by 17 points (34-17).
In Under-14 boys semifinals, Rajouri got better of Jammu by 12 points (21-9), while Poonch outplayed Kathua by 8 points (33-25).
In other results of Under-14 boys, Rajouri thrashed Kishtwar by 25 points, Jammu prevailed over Ramban by 13 points, Poonch scripted narrow win over Jammu by 3 points, Udhampur beat Samba by 5 points and Poonch drubbed Samba by 11 points.
Meanwhile, in other results of Under-17 boys, Doda registered a narrow win over Rajouri by 2 points, Jammu drubbed Ramban by 16 points, Rajouri defeated Reasi by 8 points, Doda thrashed Ramban by 20 points and Jammu toppled Reasi by 14 points.
It is pertinent to mention here that the tournament is as part of annual calendar of activities by the Department of Youth Services and Sports to select Jammu division team, which will take part in Inter-Division tournaments meant for selecting the state team.
Tirath Ram, District Youth Services and Sports Officer, Jammu was the organizing secretary of the tournament, while Zonal Physical Education Officer, Jeet Singh was the convener Technical Committee. 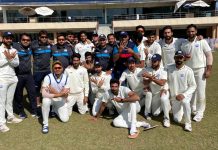