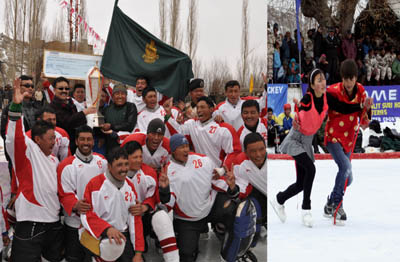 Excelsior  Sports Correspondent
LEH, Feb 16: Defeating their rivals Ibex Challengers by two goals to nil (2-0) in the summit clash, Indo Tibetan Border Police (ITBP) team lifted the title trophy of the 4th Ladakh Winter Tourism Promotion Ice Hockey Championship at Karzoo Ice Hockey Rink, here.
The closing function was presided over by the Chief Executive Councilor (CEO), LAHDC, Leh Rigzin Spalbar.
The highlight of the concluding function was a Figure Skating Dance by the young players including boys and girls of Leh on the tune and rhythm of an enthralling Bhutanese song choreographed by Dorjey Wangchok Mogol.
Speaking on the occasion the CEC Rigzin Spalbar said that winter games have been proving a good medium in promoting winter tourism in Ladakh and the LAHDC would like to organize the winter games as a carnival in future in a more organized way.
He urged the need of advance publicity for next winter games so that the players would enthusiastically participate in the coming tournaments.
Earlier, the Assistant Director Tourism, Sonam Dorje underlined the objective of sponsoring and holding the tournament and said that tourism has been playing a vital role in the economic growth of this region adding that it is gaining further momentum in Ladakh.
The match was among others witnessed by the Executive Councilor, CAPD Ghulam Abbas Abidi, Executive Councilor Heath, Dr Sonam Wangchok and top ranking Army and ITBP officers.