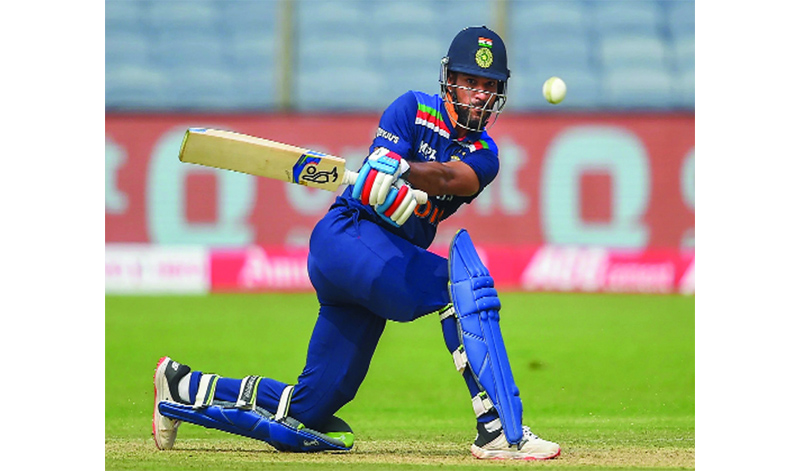 AHMEDABAD,  Feb 10: The returning Shikhar Dhawan will add more firepower to a ruthless India, who are faced with the problem of plenty, as they eye a clean sweep of West Indies in an inconsequential third ODI here on Friday.

Hosts India head into the final match of the series after having ticked almost all the boxes in the first two games, which they won comfortably.

Senior opener Dhawan was among the four players, including a reserve bowler, who had tested positive for COVID-19 just four days ahead of the start of the ODI leg.

But now that the southpaw is back, the Indian team could be forced to make few changes to its winning combination.

In his absence, the team management opened with Ishan Kishan in the first game and the flamboyant Rishabh Pant in the second.

After his side’s 44-run win in the second game on Wednesday, India skipper Rohit Sharma made it clear that Dhawan will be back for the last match of the ODI series.

“We will get Shikhar back for next game, and he needs some game time. It is not always the results. We wanted to try it one game,” Rohit had said.

This means that vice-captain KL Rahul would continue to bat in the middle-order along with former skipper Virat Kohli, whose search for his 71st international hundred continues.

The hosts, who were restricted to 237 for nine in the second game, would be keen to post a big score if they again bat first.

Skipper Rohit failed in the last game but it is common knowledge that he can take on any attack on his day, and so is the case with Dhawan.

Pant will go back to the middle-order alongside Suryakumar Yadav, who is likely to retain his place after emerging as the team’s highest scorer in the second match following a top-order collapse.

In all probability, all-rounder Deepak Hooda would have to make way for Dhawan in the playing XI.

All the middle-order batters — be it Pant, Suryakumar, Kohli or KL — would be keen to get some more runs under their belt and end the ODI leg on a high.

It remains to be seen whether Shreyas Iyer, if available for selection, can make the playing XI or not.

The Indian bowlers dished out a clinical show in the two preceding matches, dismissing their opponents for 176 and 193, respectively.

And with the series sealed, the Indian team management can afford to make few changes and give opportunities to new players.

So, either left-arm orthodox spinner Kuldeep Yadav, who is making a comeback after recovering from an injury, or young leg-spinner Ravi Bishnoi could get a look-in.

This means that either Yuzvendra Chahal or Washington Sundar could be rested to make way for one of their teammates.

Also, Madhya Pradesh pacer Avesh Khan has been waiting in the wings, and the team management might also give him a game.

With pacer Prasidh Krishna taking four wickets in an excellent second game and Shardul Thakur also among the wickets, it is highly unlikely that the duo would be dropped.

So if Avesh is included, probably Mohammed Siraj would have to make way.

Meanwhile, the West Indies, who have already conceded the series, would be looking to put up an improvised show with the bat and regain some lost ground.

The second ODI was the 11th time in the last 17 games that the West Indies have failed to bat their quota of 50 overs.

Their batters, including skipper Kieron Pollard and senior all-rounder Jason Holder, must put a prize on their wickets.

Apart from the duo of Pollard and Holder, the likes of Shai Hope, Brandon King and the swashbuckling Nicolas Pooran, would also be looking to dig deep and get some runs under their belt.

On the bowling front, West Indies did well to restrict India in the second ODI and would want to continue from where they left.

Pacers Kemar Roach, Alzarri Joseph and Odean Smith hit the right length, but the role of spinners Fabian Allen and Akeal Hosein is also crucial from the visitors’ point of view.