CHENNAI, Feb 21: Teenaged Indian Grandmaster R Praggnanandhaa stunned world no.1 Magnus Carlsen in the eighth round of the Airthings Masters online rapid chess tournament, becoming only the third from the country to clinch a victory over the Norwegian superstar.
The 16-year old prodigy was hailed by many on the social media, including cricket legend Sachin Tendulkar and All-India Chess Federation president Sanjay Kapoor, after he followed five-time former world champion Viswanathan Anand and P Harikrishna in getting the better of Carlsen, the 31-year-old who is also the reigning world champion.
Praggnanandhaa won with black pieces in 39 moves in a Tarrasch variation game early on Monday to halt Carlsen’s run of three straight wins.
“I am delighted to have beaten Carlsen. It will give me a lot of confidence for the rest of the tournament and future also,” he told PTI over phone.
For someone, who brought down the best chess player on the planet, Praggnanandhaa was not celebrating big just yet and said he wanted to stay focussed on the rest of the tournament.
“I have to focus on the upcoming matches. After the match I just wanted to rest,” he said with a smile.
The teenaged GM also said there was no specific plan for the match against the Norwegian.
“No special plan or preparation for the Carlsen match. I just wanted to enjoy playing against him and not put too much pressure on myself (of taking on the world champion),” Praggu, as he is affectionately called by friends and coach R B Ramesh, said.
His coach, meanwhile, said, he was overjoyed with his ward’s triumph over the best player in the world.
“It is a great feeling. I am very proud of his achievement. This should do a world of good to his self-belief,” Ramesh said.
The Indian GM lies in joint 12th spot after eight rounds with eight points.
“Always proud of our talents! Very good day for @rpragchess,” tweeted Anand, who has eight victories over Carlsen to his credit.
His spectacular win over Carlsen comes after a moderate run in the earlier rounds, which included a solitary victory over top-10 player Levon Aronian, two draws and four defeats.
He drew against Anish Giri and Quang Liem Le and lost to Eric Hansen, Ding Liren, Jan-Kryzstof Duda and Shakhriyar Mamedyarov.
What a wonderful feeling it must be for Pragg. All of 16, and to have beaten the experienced & decorated Magnus Carlsen, and that too while playing black, is magical! Best wishes on a long & successful chess career ahead. You’ve made India proud!” Tendulkar tweeted.
Sanjay Kapoor hailed the young GM and tweeted : “16 yrs old India #Chess prodigy, Rameshbabu Praggnanandhaa has humbled none other than the World Chess Champion, @MagnusCarlsen. Wow! This young boy deserves a huge applause for his remarkable feat.”
Praggnanandhaa is the fifth youngest person ever to become a GM.
Odisha Chief Minister Naveen Patnaik also congratulated the young star.
“Congratulate young Indian Grandmaster R #Praggnanandhaa on his stunning victory over reigning World Champion GM #MagnusCarlsen during ongoing #AirthingsMasters Chess Tournament. Wish him all the best for the future,” he tweeted.
Praggnanandhaa will play four rounds later on Monday night and will be up against Nodirbek Abusattorov, Andrey Esipenko, Russia’s Ian Nepomniachtchi and Alexandra Kosteniuk.
Nepomniachtchi, who lost the world championship match a few months ago to Carlsen, is on top of the standings with 19 points followed by Ding Liren and Hansen (both on 15 points).
In the Airthings Masters, a 16-player online rapid tournament, a player gets three points for a win and one for a draw in the preliminary rounds. Seven more rounds remain in the preliminary phase. (PTI) 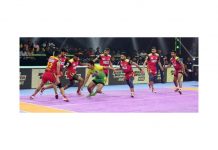 India to China: Attempts to unilaterally change the Line of Actual Control won’t be...