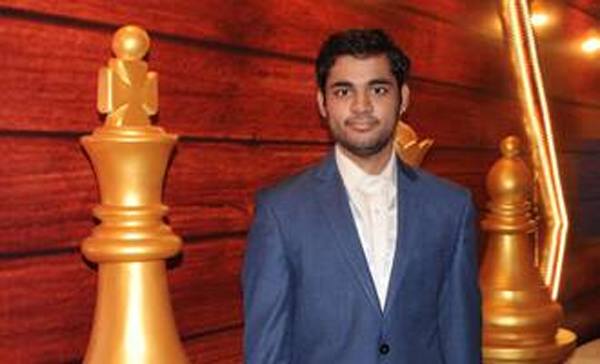 WIJK AAN ZEE (Netherlands), Jan 30:  Indian Grandmaster Arjun Erigaisi won the Tata Steel Challengers event with a round to spare after a draw with Thai Dai Van Nguyen of Czech Republic in the 12th and penultimate round here.

The 18-year old Erigaisi, who has been in fine form throughout the event and has been unbeaten so far, took a quick draw late on Saturday against Nguyen, who is joint second, in just 15 moves to take his tally to 9.5 points.

He is 1.5 points ahead of the second placed Nguyen and Jonas Buhl Bjerre.

The teenaged player (Elo 2632) has so far won seven games and drawn five. He faces Marc Andria Maurizzi of France in the final round later on Sunday. Maurizzi had beaten India’s Surya Shekhar Ganguly in the 12th round. Ganguly has 5.5 points and is in 9th place.

With the triumph, the Indian GM qualifies for next year’s Tata Steel Masters Group.

He is the fourth Indian after P Harikrishna, B Adhiban and Vidit Santhosh Gujrathi to win the Tata Steel Challengers event.

Former world champion Viswanathan Anand congratulated Erigiasi on the win and wrote on Twitter: “Congrats to Arjun on such a smooth and strong performance! He has been with us in WACa and we are so proud to see him win two Tata Steel events in two continents!! Well done.”

Erigaisi is coached by GM Srinath Narayanan and mentored by Anand as part of the Westbridge Anand Chess Academy.  (PTI)