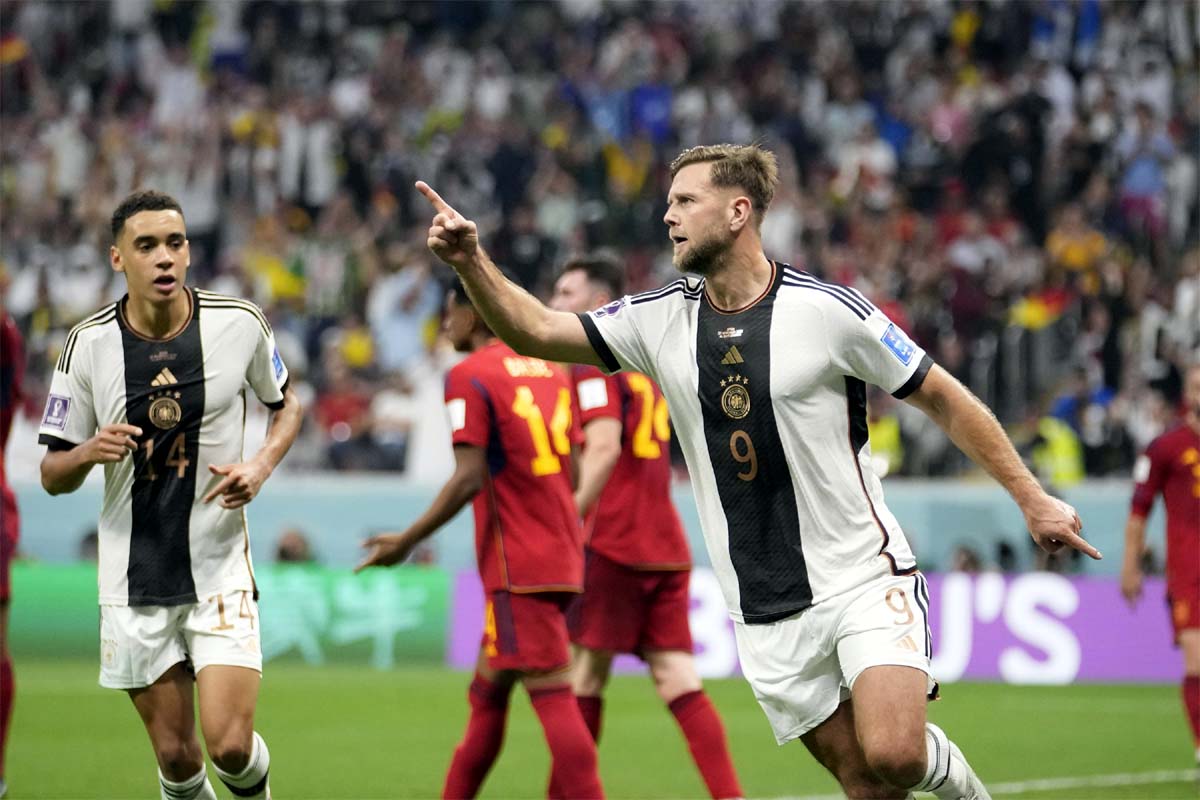 AL KHOR (Qatar), Nov 28: Only a win for Germany in the final group game will give the four-time World Cup champions a chance to avoid a second straight early elimination.
At least they’re improving.
Substitute Niclas Füllkrug scored in the 83rd minute on Sunday to give Germany a 1-1 draw against Spain at Al Bayt Stadium in one of the most anticipated matches of this year’s World Cup. A loss would not have eliminated Germany, but it would have left the team in a much more difficult position.
“It was important that we got this point,” Füllkrug said.
“We definitely have a chance to get through to the next round now. We can now go into the last game with a good feeling and hope that everything goes well.”
Germany’s fate will be decided on Thursday against Costa Rica, which defeated Japan 1-0 earlier Sunday. Even a win may not be enough for the Germans, who lost to Japan in their opener and are in last place in Group E. They need the other result to go their way.
If both Germany and Spain win, both will advance. If there is a draw in the Japan-Spain match, Germany will need to overcome a goal-difference deficit against the Japanese. If Japan is victorious, then the Germans will have to top Spain — which beat Costa Rica 7-0 — on goal difference to get through.
“I hope this will give us a boost,” Germany coach Hansi Flick said, adding that he was satisfied with the result and his team’s attitude.
“We know that this was the first step and we want to see against Costa Rica if we can craft the conditions to go through to the round of 16.”
Spain coach Luis Enrique said the draw wasn’t a bad result for Spain.
“We are still leaders of the group of death,” Luis Enrique said.
“We still depend on ourselves and a draw will be enough against Japan, but we will try to go and win that match.”
Álvaro Morata put Spain in the lead in the 62nd minute with a nice one-touch from close range after a well-placed low cross from Jordi Alba.
Germany only threatened sporadically with a few breakaways and set pieces, but the team improved gradually and Füllkrug finally found the equalizer with a shot from close range into the top of the net. Germany then squandered some last-gasp chances to get the win in the end.
“They are Germany, a great team,” Morata said.
“They had an opportunity and they took advantage of it.”
Füllkrug’s goal kept Germany from enduring consecutive losses at the start of a World Cup for the first time. The Germans won the 2014 World Cup but since then have won only one of its five World Cup matches. At the 2018 tournament in Russia, the team lost two of its matches and went home early.
Spain hasn’t lost to Germany in an official competition since the 1988 European Championship. The Germans lost to Spain 6-0 the last time they met, in the Nations League two years ago. Germany’s last win against “La Roja” came in a friendly eight years ago.
It was the fifth meeting between the powerhouses at World Cups, with Spain winning the most recent one 1-0 in the semifinals of the 2010 tournament in South Africa.
Spain won its lone World Cup in 2010 and was eliminated in the round of 16 in 2018.
NEUER’S MARK
Germany captain Manuel Neuer made his 18th World Cup appearance to pull even with Germany’s Sepp Maier and Brazil’s Claudio Taffarel for the most appearances by a goalkeeper at the tournament.
NO PROTEST
The Germany players did not cover their mouths to protest FIFA’s clampdown on the “One Love” armbands on Sunday. They made the gesture before the team’s opener against Japan.
WHAT’S NEXT
Spain’s next match is against Japan at Khalifa International Stadium, while Germany returns to Al Bayt Stadium to face Costa Rica. Both matches will be played Thursday at the same time. (AP)