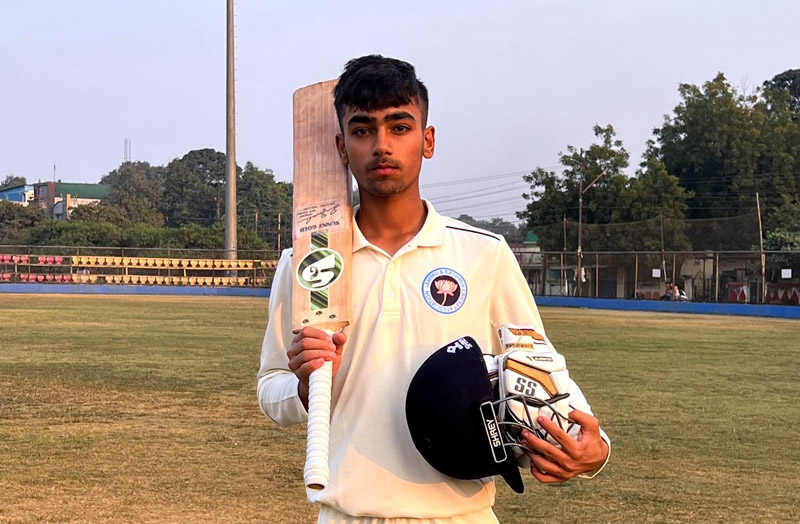 JAMMU, Dec 6: Talented middle-order batsman Dhruv Sharma’s dream run with the bat continues as he slammed a cracking double century, while opening batsman Arihant scored a magnificent century in J&K’s huge total of 576/5 in the first innings against Mizoram in Vijay Merchant Trophy at Sector-1 ground, Bhllai today.
Earlier, winning the toss and batting first, J&K lost opening batsman Salman Ahmad Bakshi (0) early in the innings. However, Arihant and Irfan Ahmad took the score to 153 runs before Irfan’s dismissal at his individual score of 63 runs including 13 boundaries. Then Dhruv Sharma joined Arihant and sent the bowlers on a leather-hunt to take the score to 325 runs in 53 overs before Arihant was dismissed at his individual score of 145 runs off 138 balls studded with 15 fours and 5 sixes.
Dhruv continued his brilliance and alongwith Haadi Ibrahim (55) and Varun Singh Charak (48) scored huge unbeaten 236 runs off 224 balls, studded with 39 delectable boundaries.
It may be recalled that Dhruv had scored 73 in the first innings and 107 in the second innings of the Vijay Merchant Trophy match against Uttarakhand a few days back.
J&K were 576/5 in 90 overs at the draw of stumps on Day-1 today
For Mizoram, Tetea took 2 wickets, while Mala and Rahul claimed 1 wicket each.
The Sub Committee Members of JKCA including Brig Anil Gupta, Member-Administration; cricketer Mithun Manhas, Member Cricket Operations and Development and Advocate Sunil Sethi, Member Legal Affairs JKCA congratulated the team for this historic total and the batters for their exceptional batting display.