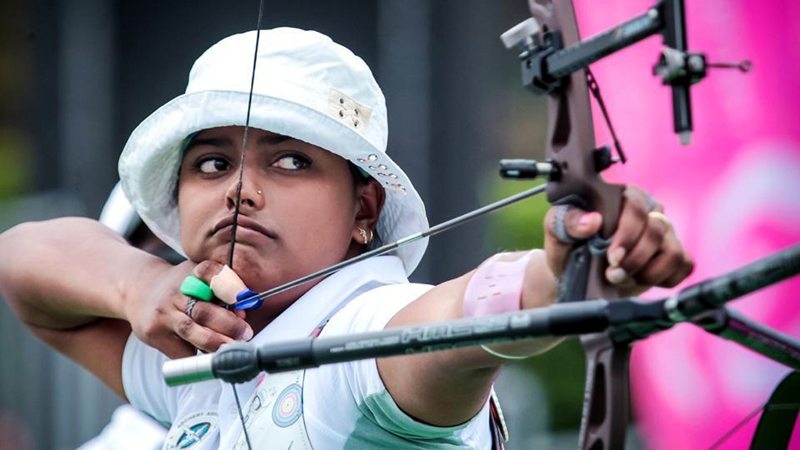 Bangkok, Nov 28:
The seasoned Deepika Kumari struck gold, while Ankita Bhakat bagged a silver after securing India an Olympic quota place at the Continental Qualification Tournament held on the sidelines of the 21st Asian Championships here today.
Three individual places were up for grabs from the qualifications and Indian archers, who are competing without a flag due to the national federation’s suspension, made a big statement with top seed Deepika and sixth seed Ankita’s stellar show.
Entering the brackets as the number one ranked woman, Deepika put up a flawless show to defeat Nur Afisa Abdul Halil of Malaysia 7-2, Zahra Nemati (Iran) 6-4 and local girl Narisara Khunhiranchaiyo 6-2 to make the last four, thereby securing an Olympic quota.
“We were a little bit nervous earlier in the day… There was too much wind also. I just concentrated on my breathing and told myself ‘just do it’. I’m feeling good right now,” Deepika said.
It was before the final round against the local challenger Narisara, Deepika promised her fiance and teammate Atanu to shoot a 28 but Deepika did one better by hitting two perfect 10s and one nine to seal the issue.
“We wanted to give our best. Also I promised (mixed team partner and fiance) Atanu that I will shoot 28. He told me go and shoot. He understands my mind too and it turned out nicely,” she said.
“Now we hope to qualify a team berth from the Berlin stage of the World Cup next year,” she added.
Later in the day, Deepika stormed into the final with another one-sided 6-2 win over Nguyet.
Ankita, on the other hand, defeated Lam Shuk Ching Ada of Hong Kong 7-1, Nguyen Thi Phuong of Vietnam 6-0 and Anastassiya Bannova (Kazhakstan) 6-4 and Karma of Bhutan 6-2 to make it an all-Indian final.
The Indian trio of Deepika, Ankita and Laishram Bombayala Devi competed under a neutral flag due to the current suspension of the Archery Association of India (AAI), which is in administrative turmoil right now.
India now have a team qualification in the men’s section and an individual quota in the women’s event of the 2020 Tokyo Olympics.
Deepika, Ankita and Laishram Bombayala Devi competed under a neutral flag.
It is India’s second Olympic quota place in archery after the men’s recurve team of Tarundeep Rai, Atanu Das and Pravin Jadhav had secured the first in the World Championships earlier this year.
The Berlin stage of the 2020 World Cup is the last qualifying event in archery.
“The whole team is very happy at least we won one quota. This tournament has been very good show for us,” she said, referring to their rich medal haul of one gold, two silver and four bronze medals in the Asian Archery Championships that concluded on Wednesday. (PTI)