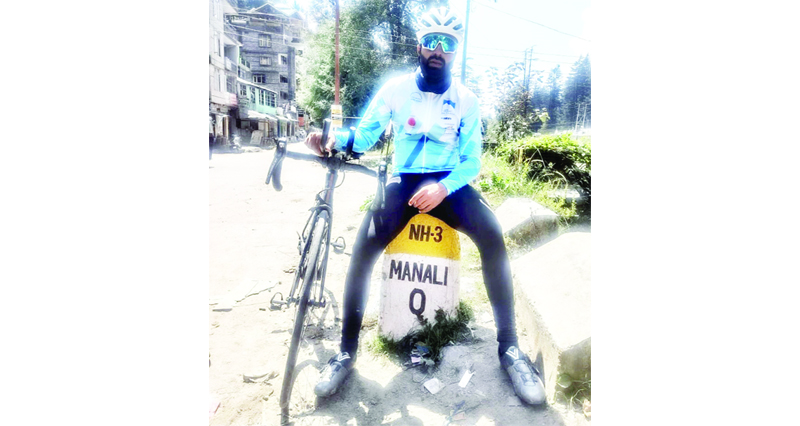 Guinness record holder cyclist Adil Teli has set yet another one by traveling 475 km from Leh to Manali in 29.18 hours and 21 seconds beating the earlier record of 35. 32 hours.
Adil started from Leh at 5.41 am Sunday and after crossing five high passes on the way reached Manali on Monday at 11.59 am beating the world record of Bharat Pannu of Indian Army by approximately 6.16 hours.
“I did not sleep during all these 29 hours and the road was rougher than expected,” Adil said.
He said the most difficult part of the journey was to cross the five high altitude Himalayan passes, of which the Tanglangla pass which is at a height of 5,300 meter above sea level was the most challenging. The other high passes on the road were NakeeLa pass, Lachung La pass, Baralacha La pass were all above 4,000 meters from above sea level while Rohtang La pass is 3,800 meter above sea level which were also challenging to cross during the night times and amid cold conditions due to accumulation of snow on the high Himalayan peaks making the breeze pierce like knife.
Adil hails from Narbal in central Kashmir’s Budgam district and has already pedaled from Kashmir to Kanyakumari, covering a distance of 3,600 kilometers in just eight days in 2021 and recorded his name in the Guinness book of world records. About Leh to Manali, he said .
“it was very cold at places and my hands and feet were freezing at times. But I kept riding and continued with a solid mindset that I have to create a new Guinness record and beat the old one with a good margin”.
Adil said: “I did not sleep before achieving my goal — success and happiness on Monday”.
Elated after creating his second Guinness world record, Adil said: “I have plans to break more records in near future”. He said it was not easy to break the record by traveling from Leh to Manali through such high and rough peaks amid low oxygen level at places. He said at places there were muddy and stone filled roads and at some places gushing water was flowing on the road which were challenging as he moved forward. (UNI)