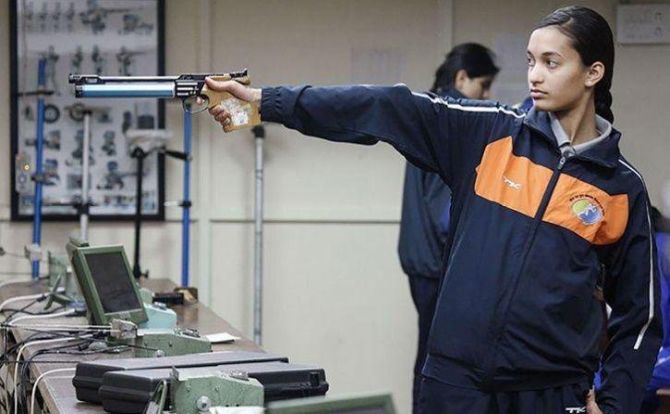 Doha, Nov 8:
Chinki Yadav secured India’s 11th Tokyo Olympic quota in shooting with a career-best qualification score of 588 but could not win a medal at the 14th Asian Championship here today.
The national championship silver and junior world championship bronze-medallist, however, could not replicate her qualification form in the final, only managing a sixth-place finish with a score of 116.
Daughter of an electrician in the Madhya Pradesh government’s sports department in Bhopal, Chinki finished a creditable second in the qualifications of women’s 25m pistol event at the Lusail Shooting Range.
Other Indians in the fray, Annu Raj Singh (575) and Neeraj Kaur (572) finished 21st and 27th respectively.
India have already bagged Olympic quota places in 10m air rifle (men and women), 50m rifle 3 position (men), 10m air pistol (men and women) and 25m air pistol (women).
In other results, the team of Tejaswini Sawant, Anjum Moudgil and Kajal Saini won a gold in women’s 50m Rifle Prone event with a combined score of 1864.8.
In men’s 50m Rifle Prone, the team of Sanjeev Rajput, Shubhankar Pramanick and Tarun Yadav won silver with a combined score of 1865.1
In men’s 25m Standard Pistol event, Udhayveer Sidhu shot 577 to win the individual silver while Udhayveer, Vijayveer Sidhu and Gurpreet Singh won team gold with a total of 1710.
India continued its dominance in the junior and youth categories by picking up 11 more medals on the day, including six more gold. The country has a total medal count of 35 so far in the competition. (PTI)