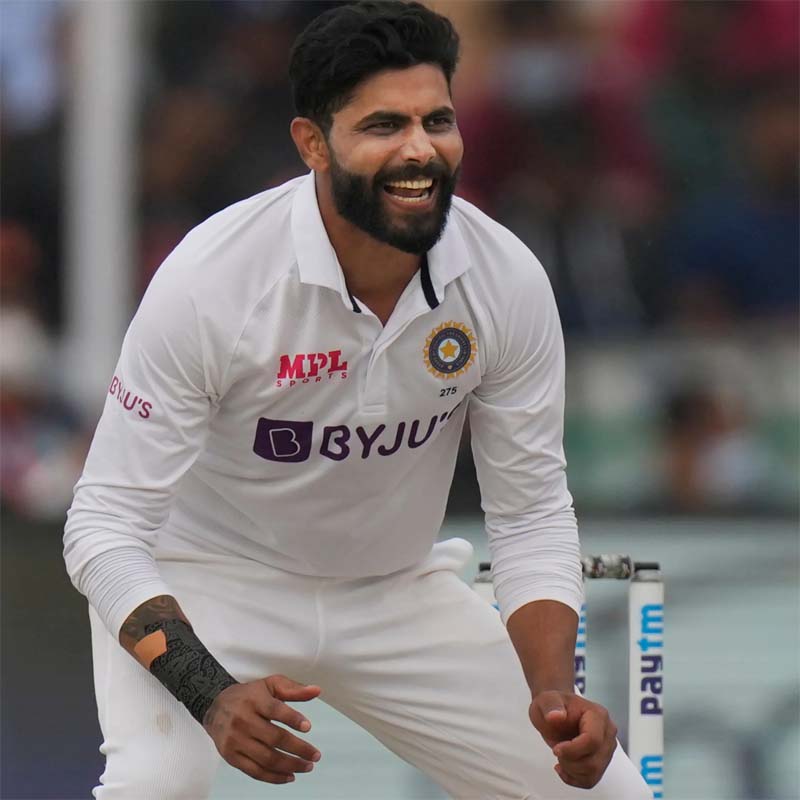 BIRMINGHAM, July 3:  Senior India all-rounder Ravindra Jadeja feels scoring a hundred in tough English conditions will not only enhance his reputation as a batter but will also serve as a big confidence booster going forward in his career.

Jadeja hit 104 off 194 deliveries and together with Rishabh Pant (146 off 111 balls) shared 222 runs for the sixth wicket to rescue India from 98 for five in their first innings in the rescheduled fifth and final Test against England here.

“I am very happy that I scored a hundred outside India and that too in England. It is a big thing as a player.

“For me, I take this hundred as a confidence booster to score a hundred in England in swinging conditions,” Jadeja said after the second’s day play at Edgbaston after scoring his first overseas century.

Jadeja, who has come of age in terms of his batting in the last few years, said the key to success for a batter in England is the sheer ability to judge the ball.

“In England you need to play close to your body because if you try to play cover drives and square drives there are chances that you may get out caught behind or in the slips.

“So my focus was to leave balls which are outside off stump. I thought of hitting the ball if it was pitched close to me. Luckily the balls I picked were in my areas. You need to know your off stump and leave the ball which is pitched outside off stump,’ he said about his knock, only the second Test century of his career.”

Jadeja said a disciplined approach is also a vital factor in succeeding on swing-friendly English conditions as a batter.

“In these conditions the ball swings so you need to bring in discipline in your batting. You have to play picking the balls which are on fourth and fifth stumps. In 40, 50 or 70 you can get out to a good ball.

“I was just thinking that if I get a good ball I can do nothing but at least I should try not to play a bad shot and not go in search of boundaries. If the ball is in my range and my areas I will hit that,” he said.

The fiery all-rounder from Saurashtra doesn’t believe in tags, saying he is a team man first before everything.

“I won’t like to give myself any tag. Whatever the team needs I try to perform accordingly. As an all-rounder sometimes situations comes when you need to score runs and either save or win the match for the team.

“In bowling you are expected to give breakthroughs. I consider myself a team player. Whatever teams needs I try to do.”

Jadeja said he enjoys batting with the dashing Pant as it makes life easy for him.

“There is to some extent less pressure while batting with Rishabh because he doesn’t mercy any bowler. Standing at the non-striker end I was feeling happy because the England weren’t focussing too much on me.

“They were looking to get Rishabh’s wicket. But as a batter you need focus and concentrate on England because you can get a good delivery anytime,” he said.

“So me and Rishabh were talking on building a long partnership because we had to put a lot of hardwork to take the team to a good position from 98 for 5.”

Jadeja is coming off a nightmarish IPL campaign. He struggled under the pressure of leading a side and relinquished the Chennai Super Kings captaincy midway to focus on his game.

“I had nothing in mind about IPL. Whatever has happened there is past but when you are paying for India, the entire focus is on performing for the Indian team. If I perform well for India there is no bigger satisfaction for me.”

He also took a dig at England pacer James Anderson while reacting to the latter’s comment that the Indian all-rounder thinks like a proper batter now.

“I always try to give myself time and build partnerships. Whoever is the set batsman at the other end I try to give him company. Good that Jimmy Anderson has realised my potential after 2014. I am happy,” he said.  (PTI)