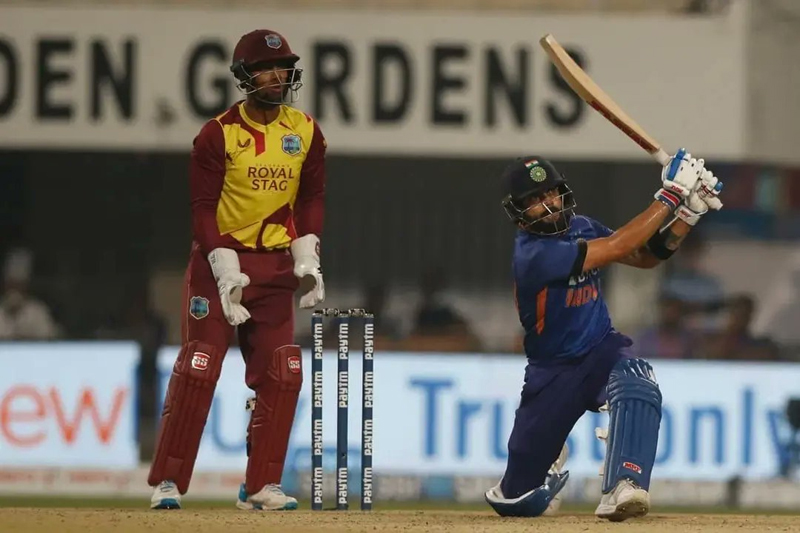 KOLKATA, Feb 18: Bhuvneshwar Kumar and Harshal Patel produced superb bowling in slog overs as India survived some anxious moments before walking out with an eight-run won over West Indies in the second T20I that handed them an unassailable 2-0 lead in the three-match series here on Friday.
Chasing a stiff 187, wicketkeeper-batter Nicholas Pooran (62 off 41 balls) and Rovman Powell (68 not out from 36 balls) hit belligerent fifties to keep them in the hunt as they needed just 29 runs from the last two overs.
But death bowling specialist, Bhuvneshwar Kumar revived India’s hopes by removing the dangerous-looking Pooran with a slower off-cutter.
Under pressure after he dropped Rovman Powell off his own bowling, Bhuvneshwar was brilliant and conceded just four runs in the over.
Needing to defend 25 in the final over, Patel was hit for two consecutive sixes but he held his nerves to seal the issue for India.
This was India’s 100th win in T20Is as they sealed the series with one match to go on Sunday.
Earlier continuing his impressive run in his debut series, Ravi Bishnoi dismissed Brandon King (22) in his third delivery to break the second-wicket stand.
But Pooran and Powell looked without any trouble against the Indian attack.
Wicketkeeper-batter Pooran continued his impressive form to smash a second successive half-century, while Powell gave a fine support at the other end with a 28-ball 50 as the Windies recovered from being 59/3 inside nine overs.
Dropped on 21 by Bishnoi in the 10th over, Pooran brought up his fifty in 34 balls — his second in as many games — with a slog over off Deepak Chahar’s final over.
Powell then completed a 28-ball fifty as India looked under real pressure before Bhuvneshwar turned it around.
Earlier, Virat Kohli was back among runs with a fifty while Rishabh Pant smashed a quick-fire unbeaten 52 to lift India to a challenging 186/5.
Kohli hit his 30th fifty in the shortest format, his first since the 57 versus Pakistan in the T20 World Cup on October 24 last year.
The former captain’s sheer elegance was on full display as he cut, pulled and also took the aerial route en route to his 41-ball 52 that had seven fours and one six.
Luck also favoured Kohli on the day as the former skipper brought up his 30th T20I fifty with a slog over long-on after Jason Holder failed to get hold of the catch as the ball went over the boundary.
But Kohli failed to make it big and was cleaned up by Chase two balls later after the Windies off-spinner breached his gate for his third wicket.
Chase was impressive in the middle overs to return with 3/25 and which included the wickets of Rohit Sharma (19) and Suryakumar Yadav (8).
Thereafter it was Pant and Venkatesh Iyer (33 from 18 balls) show on offer as they took charge on the likes of Kieron Pollard and Romario Shepherd in their 76-run partnership from 35 balls.
Pant (52 off 28 balls) brought up his third fifty in T20Is with a double in the penultimate delivery of the innings, taking just 27 balls to get to the milestone.
Earlier India got off to a slow start with Sheldon Cottrell bowling four dots on the trot before dismissing Ishan Kishan in the second over of the day.
Kishan, who was the most expensive buy of the IPL 2022 mega auction, looked listless and under pressure to continue his poor form and departed for two after his 10-ball stay.(PTI)
But thereafter it was Kohli show at the sparsely-crowded Eden as the former India skipper delighted his fans with his elegant timing and strokeplay.
Getting off the mark with a boundary with a whip to the square leg boundary, Kohli found his timing early on and got a second boundary in the same over of Akeal Hossain.
Kohli was the aggressor and skipper Rohit was happy to play the second fiddle as the duo took India’s score to almost 50 in the first six overs.
There was a clear shift in India’s batting in the powerplay as the duo were not afraid to take the aerial route.
Rohit departed for 19 in 18 balls after a fine partnership with Kohli that yielded 49 runs from 36 balls before Chase gave the breakthrough in his first over removing the Indian skipper after inducing a thick leading edge to be caught at the point.
In his next over, Chase accounted for Suryakumar but Kohli ensured that there was no further damage. (PTI)