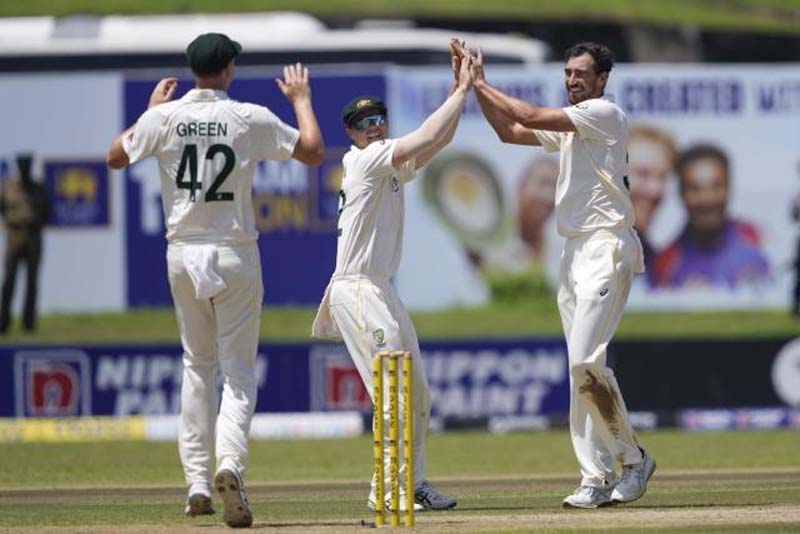 Nathan Lyon took his 20th five-wicket haul to bowl Sri Lanka out for 212 before Australia reached 98-3 at stumps today the opening day of the first cricket test.
Sri Lankan off spinner Ramesh Mendis dismissed David Warner (25) lbw and had Marnus Labuschagne (13) caught by Asitha Fernando in Australia’s innings to finish the day on 2-35.
Steven Smith was run out for 6 after a mix-up with Usman Khawaja, who refused to run after calling Smith for a single.
Khawaja was batting on 47 with Travis Head on 6 at stumps
Earlier, Lyon returned bowling figures of 5-90 and leg spinner Mitchell Swepson had 3-55 to help Australia bowl Sri Lanka out to a modest score.
On Wednesday Lyon went past former New Zealand great Richard Hadlee’s wicket tally of 431 to position himself 12th on the list of highest test wicket takers.
“I am not really sure where I stand on that list something I don’t really look at,” he told reporters.
“The top end of the wicket takers across world cricket has some amazing names. To be overtaking a few guys on whatever number it may be it’s very special, something I am very proud about.”
Niroshan Dickwella top scored for Sri Lanka with 58, his 21st test half-century. He added 42 runs for the sixth wicket with Angelo Mathews (39) after Sri Lanka lost five wickets for 97 runs, and 54 runs for the seventh wicket with Mendis (22).
“We always talked the importance of trying to knock over the tail as quickly as we can. Look at the way Dickwella played, of course Dickwella played an incredible innings, he put the pressure back on us the bowlers certainly in that middle session,” Lyon said.
Sri Lanka coach Chris Silverwood said his team should have posted a bigger score after choosing to bat first.
“We would have liked to have put more runs on the board. Again we have lost wickets after breaks which is certainly something to work on, It happened in Bangladesh too.”
Sri Lanka opted to bat first after winning the toss and resumed its innings after tea at 191-6.
Lyon trapped Mendis lbw with just two runs added to to the teatime score to end his partnership with Dickwella.
Dickwella edged Lyon to wicketkeeper Alex Carey and had Lasith Embuldeniya (6) as his fifth wicket.
Earlier, he dismissed Dimuth Karunaratne (28) and Angelo Mathews (39), both caught by David Warner.