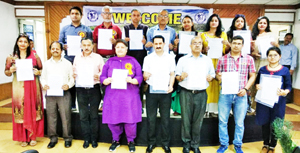 JAMMU, Apr 8: Tawi Trekkers J&K, one of the biggest trekking clubs in the country, released its calendar of activities for the year 2018-19, in a simple function held at KL Saigal Hall, Abhinav Theatre, here today.
Former MLA Ashwani Sharma who was the chief guest on the occasion, released the Calendar in the  presence of Prem Sadotra, General Secretary, J&K High Court Bar Association, Jammu; Haji Abdul Qayoom, Chief Sports Officer of J&K State Sports Council  and a number of heads of the various educational institutions.
Highlighting the activities to be undertaken by the club this year President of the club Ram Khajuria mentioned that the club will organize the Himalayan Trekking Programme in Manali area of Himachal Pradesh for about 500 school children during summer vacations besides the Heritage Trekking Programme to be conducted during April and November to December, two trekking expeditions in Dhauladhar Range in Himachal Pradesh for Junior and Senior members and one in Moungri area of Udhampur district.
“Regular short treks and visits to heritage sites and Wild Life parks will also be organised in Jammu region,” Mr Khajuria added.
A state level sport climbing competition exclusively for women will also be conducted by Tawi Trekkers at sprawling buds school in the month of July, 2018 prior to the participation of State women’s team in the 3rd North Zone Women Sport Climbing Competition scheduled to be held at Indian Mountaineering Foundation, New Delhi.
Another attraction of the year would be participation of club’s mountaineers in a major mountaineering expedition to Kang Yissay and some other peaks in Ladakh Himalaya in August, 2018.   The prestigious expedition will be organized by Mountaineering Association of J&K and sponsored by J&K State Sports Council. Besides, the club will also organize a small, low budget mountaineering expedition to Mun peak in Dhauladhar range of Dharamshala which the club could not organize last year.
While releasing the calendar Ashwani Sharma who is also the Patron of the club hoped that with concerted efforts of the club and Mountaineering Association of J&K and generous sponsorship of various activities by the J&K State Sports Council.

Budget 2023 | Income Tax Rebate Limit Increased, No Tax On Income Up To...

Customs Duty On Import Of Certain Inputs For Mobile Phone Manufacturing To Be Cut:...

Promotion Of Tourism To Be Taken Up On Mission Mode With Active Participation Of...