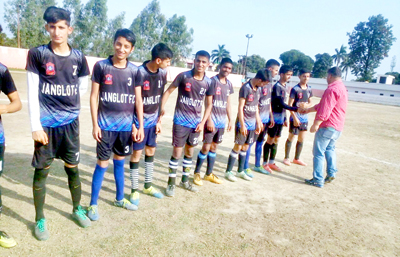 KATHUA, Apr 10: Stadium XI and Highflyers Football Club defeated their rivals convincingly in the ongoing Mufti Mohammad Sayeed Memorial Gold Cup Football State League Tournament, being organized by the Jammu and Kashmir Football Association (JKFA) at Sports Stadium, here.
Earlier, in the first match, Stadium XI came back from behind to win a thriller by 3-2 against Janglote FC. Abhishek scored the opener for Janglote only to be equalized by Atul of Stadium XI before interval.
Second half saw attacking game from both sides which led to spot kick being awarded to Janglote which was converted into goal by Chetan.
Stadium XI accelerated their efforts to find an equalizer which they found in dying moments of the match through Rizwan which was followed by a winning goal by Vishavdev in injury time. Atul was awarded man of the match.
The second match saw Highflyers FC (HFC) fight it out with Kharote Football Club.  HFC drew first blood and scored two back to back goals in first half through Ranjeet Jasrotia and Rakesh Singh. Kharote fought back and scored two goals to equalize through Deepak and Naseeb after interval. HFC retook the lead in 55th minute through Abhishek to win the match 3-2. Abhishek bagged man of the match award.
The technical panel included Rahul, Shivam, Krishna, Atul and Meenakshi.