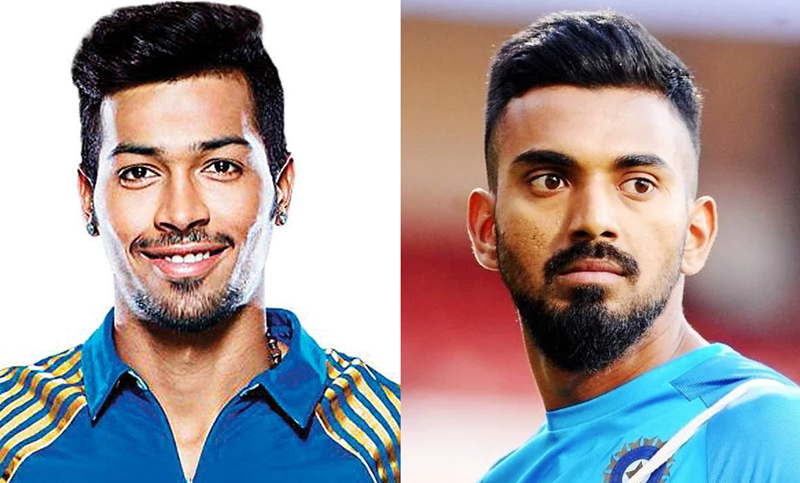 New Delhi/Sydney, Jan 11: Hardik Pandya and K L Rahul were today suspended for their outrage-evoking comments on women by India’s cricket administrators, hours after the duo’s on-field leader Virat Kohli expressed his strong disapproval.
The under-fire players have been suspended pending an inquiry into their sexist comments on a TV show, ruling them out of the three-match ODI series against Australia beginning tomorrow in Sydney.
“Both Pandya and Rahul have been suspended pending an inquiry,” the Committee of Administrators (CoA) chairman Vinod Rai said.
The ‘Koffee with Karan’ episode featuring the cricketers has since been taken down by the channel’s online platform.
On the show, Pandya had boasted about hooking up with multiple women and being open about it with his parents. Rahul was, however, a shade more restrained in his responses on relationships and women.
A source in the BCCI said the two will be issued fresh show cause notices before a formal enquiry begins.
“Whether it will be an internal committee of the BCCI or an ad hoc ombudsman who will conduct an inquiry, is yet to be ascertained,” the official said.
Pandya has regretted his comments twice since the show went on air on Sunday — first on his official Twitter page and then in response to the BCCI show cause notice on Wednesday.
Rahul, on the other hand, is yet to react to the controversy.
“The Indian team management will take a call on whether they would want to keep the two with the team or send them back. There is a school of thought that they be kept with the team as the backlash back home could be severe but majority in BCCI brass is against the decision,” he added.
The decision to hand them suspensions came after Rai’s CoA colleague Diana Edulji recommended the same till further action against the two. This was after the BCCI’s legal team refused to declare the comments a violation of the code of conduct.
The copy of the legal opinion, in possession of PTI, stated: “We feel that present matter doesn’t fall under the ambit of Code of Conduct and procedure of Code of Conduct can’t be invoked in present circumstances.”
Edulji had initially suggested a two-match suspension for the duo but referred the matter to the legal cell after Rai agreed with her and recommended the same.
“It is imperative that players be put under suspension till further course of action is decided for this misconduct as was done in case of (BCCI) CEO (Rahul Johri) when he was sent on leave on sexual harassment matter,” read Edulji’s response to the legal opinion.
In Sydney, on the eve of the ODI series, captain Kohli condemned the two for what he termed “inappropriate” comments but said he was not too stressed about the possibility of a ban on the all-rounder. (PTI)
“…It’s good that w e have someone like (Ravindra) Jadeja who can do the all-rounder’s role if a scenario like that occurs,” Kohli said.
Days after their historic maiden Test series triumph, Kohli asserted that the side does not stand by the “individual opinions”, which have triggered a social media storm.
In case the two are brought back from Australia, the likes of Rishabh Pant and Manish Pandey will be in contention to be their replacements. While Pandya was a certainty in the playing XI, an out-of-form Rahul was not in contention to play on Saturday.
It is speculated that the BCCI might bar players from appearing on entertainment shows owing to the ongoing furore. (PTI)