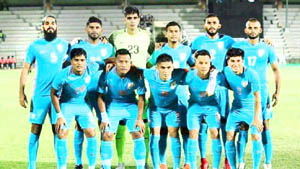 Mumbai, June 10:
Inspirational Indian captain Sunil Chhetri scored a brace to put himself on par with Lionel Messi and lead the home side to Intercontinental Cup title triumph with a 2-0 win over Kenya in the summit clash here today.
Playing in his 102nd international match, Chhetri struck in the eighth and 29th minutes to hand a dominant India the trophy to the wild celebration of the home fans at the Mumbai Football Arena here.
The 33-year-old Chhetri’s double strike capped a brilliant tournament which saw him score eight out of India’s 11 goals and put him on par with Argentine superstar Messi with 64 strikes for the country to be the joint second highest international goal scorer among active players.
He had scored three against Chinese Taipei, two each against Kenya in the league game and the final today and one against New Zealand.
Chhetri gave India the lead off a set-piece, assisted by Anirudh Thapa. Kenyan defender Bernard Oginga gave away a silly free-kick to India for a high-boot on Chhetri after throw in by Pritam Kotal. The 20-year-old Thapa took the free-kick just outside the box and Chhetri connected the ball into the left-corner of the net.
The talismanic Indian captain doubled the lead just before the half-hour mark. Anas Edathodika lofted the ball to Chhetri who controlled the ball nicely on his chest between Kenyan defenders Jockins Atudo and Micheal Kibwage before firing in a low left-footer from inside the box which gave absolutely no chance to keeper Patrick Matasi.
Chhetri had a chance to make it 3-0 and score another hat-trick but he shot over the bar off a free-kick in the 43rd minute. At the half-way stage, India were 2-0 ahead.
The star for India in the second half was their custodian Gurpreet Singh Sandhu, who ensured a clean sheet with some of his diving and breath-taking saves.
In the 46th minute came Kenya’s best chance when Ovella Ochieng took a shot from a distance but Gurpreet made a diving save and the rebound went over the bar.
Chances kept coming for Kenya, but they were not able to convert them. In the 60th minute, Ochieng launched another long-ranger but Gurpreet came to the rescue as he pushed the ball back to be cleared by his defenders.
Whenever it looked like Kenya had a chance, Gurpreet stood in their way. In the 76th minute, Ochieng hit from outside the box off a free-kick, but the India custodian palmed it away.
The Indian defence, which was shaky in their 1-2 loss against New Zealand, was solid today as they kept the Kenyan strikers at bay. Especially, Holicharan Nazary and Sandesh Jhingan were simply outstanding.
India were back as a full strength side for the final after the head coach Stephen Constantine effected seven changes in the last league game against New Zealand, which they lost 1-2. (PTI)