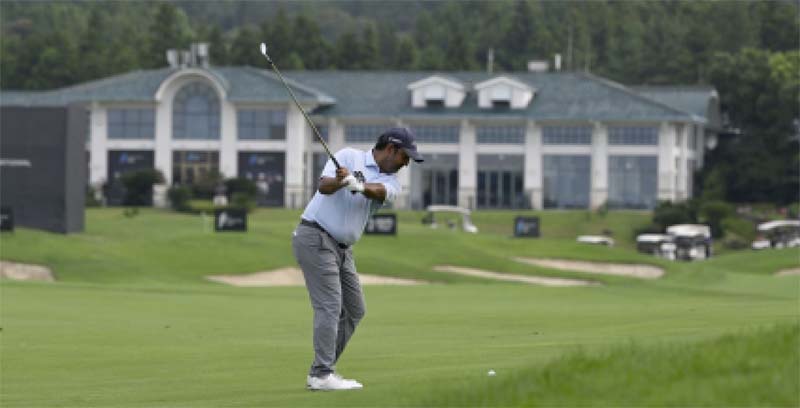 JEJU ISLAND  (Korea), Aug 18:  Indian duo of Shiv Kapur and SSP Chawrasia made a solid start with three-under 68 to be placed tied 12th at the end of the first round of the fourth International Series event golf tournament here on Thursday.

Four Indians, including veteran Jyoti Randhawa shot one-under 70 each to be Tied-39th. The other three were Veer Ahlawat, who had a good outing last week in Singapore, Rashid Khan, the runner-up at Mandiri Indonesian Open and Viraj Madappa, a one-time winner on the Asian Tour.

Of the five other Indians in the field only Honey Baisoya (71) did not go over par. He was T-71. Gaganjeet Bhullar, Ajeetesh Sandhu and S Chikkarangappa were all T-89th with cards of 72, while Rahil Gangjee was further down at T-14th with 73.

Thailand’s Pavit Tangkamolprasert started in a sensational manner with seven birdies in a row before dropping a shot on eighth. He picked two more birdies on back nine for a card of eight-under 63.

Pavit, a two-time winner on the Asian Tour, shot 63. He was two shots clear of the Korean Eric Chun (65).

Pavit was still two strokes short of the most consecutive birdies on the Asian Tour. That record of nine is held by Austrian Bernd Wiesberger at the 2017 Maybank Championship and then preferred lies were not used.

Pavit admitted he hit just one just bad shot and that was eighth and he made a bogey. He made birdies on 11th and 16th on back nine and missed a few other chances.

Chun produced one of the finest tournament rounds of his 10-year professional career. Two birdies on the front nine and four on the back nine put him in front for the first time in an Asian Tour event. A graduate of North-western University in the US, the Korean also spent much of childhood growing up in Malaysia. (PTI)