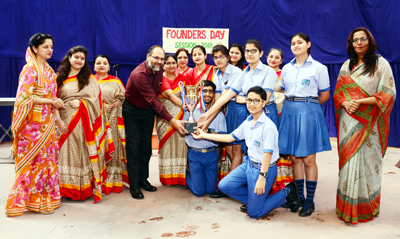 JAMMU, Apr 10: Heritage School Jammu celebrated its 14th Founder’s Day with vim and vigour, here today.
This significance of the day is that the members of the school community come together to commemorate its legacy and success as well as celebrate its achievements-individual and collective.
The Founder’s Day celebrations commenced with a special morning assembly in which the school choir enthralled everyone with their melodious songs.
A brief history of the school’s success to march was also read out in which the achievements of the school were highlighted.
The School News Letter ‘Heritage Timeline’ was also released on the occasion.
The students were awarded with All-Rounder’s Trophy for their scholastic and co-scholastic excellence on the occasion. The winners of All Rounder’s Trophies included Puneesh Puri, Rahat, Pranawat Singh, Ravinav Kundal, Shreyas Magotra, Archit Pandoh, Rujla Mahajan, Sahaj Satish Sharma, Amitesh Singh, AtharvDabgotra , Vishav Gupta, Amay Sharma, Ritikdeep, Aarush Gupta, Diya Gupta, Arnuv Raina, Ronak Singh Raina, Rhea Sharma, Anveksha Sharma and Agastya Bajaj.
Tradition House and Culture House were presented with the Best House Trophies in Co-curricular activities in the Junior wing and Senior wing respectively.
In his address the Principal, Heritage School, Jagadish Singh Dhami applauded the Culture & Tradition House students for winning the Best House Trophy and congratulated the winners of the All Rounder’s Trophy. He exhorted the students to take up challenges, be sensitive to changes and developments around them, as the world today is changing at an unprecedented rate and one needs to reorient oneself with these changes.
The programme came to a close by reverential rendition of the school song.