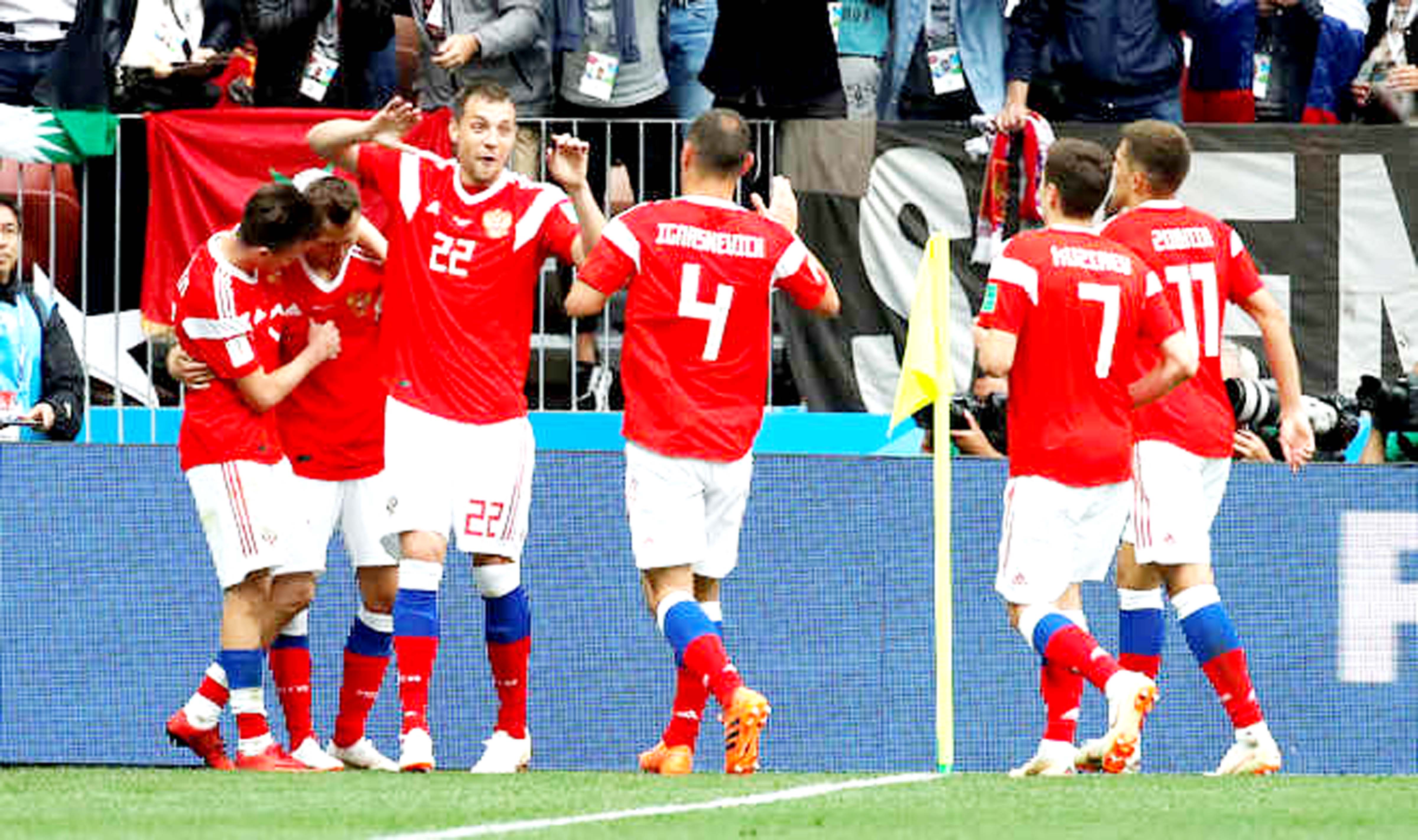 Moscow, June 14:
Denis Cheryshev struck twice for Russia as the World Cup hosts thumped Saudi Arabia 5-0 in the opening match of the tournament in Moscow today.
Iury Gazinsky scored after 12 minutes and Cheryshev added a second before the break after coming on as an injury replacement for Alan Dzagoev.
Artem Dzuyba netted a third before terrific late efforts from Cheryshev and Aleksandr Golovin wrapped up Russia’s first win since October to launch their Group A campaign in style.
Russia headed into the curtainraiser at the 80,000-capacity Luzhniki, the crucible of Russian and Soviet sport, without a victory in over eight months and ranked a lowly 70th in the world.
For Saudi Arabia it was a return to the global showpiece for the first time in 12 years, with their only previous finals wins at the 1994 World Cup.
Only South Africa, in 2010, have failed to advance from the group stage as the host nation and a seven-match winless run had ramped up the pressure on Stanislav Cherchesov’s side.
A lack of an attacking threat in recent outings was a primary concern for Russia going into a group campaign in which they will also face Egypt and Uruguay.
Those fears were soon washed away, at least for the time being, as Alexander Samedov and Fedor Smolov carved out early chances only to be denied by desperate sliding blocks.
The opening goal came soon after, as Saudi Arabia failed to clear a corner and a curling cross in from the left by Golovin picked out an unmarked Gazinsky to head low into the far corner.
It was a goal that prompted Russian President Vladimir Putin to turn to the Saudi crown prince Mohammed bin Salman, seated alongside FIFA chief Gianni Infantino, and shake his hand.
Russia lost Dzagoev to a hamstring injury midway through the first half, the CSKA Moscow midfielder clutching his hamstring as he crumpled to the turf.
But his replacement, former Real Madrid winger Cheryshev, celebrated his recent recall to the national side with Russia’s second goal two minutes before half-time. Cheryshev was still left with plenty of work to do inside the area after a pass from Roman Zobnin, brilliantly flicking the ball past two closing defenders before rifling into the roof of the net.
Saudi briefly threatened early in the second half when an inviting cross in from the right skipped just beyond the reach of Taiseer Al-Jassam.
Russia then nearly grabbed a third when Abdullah Al-Muaiouf spilled a low drive from      Roman Zobnin, the Saudi goalkeeper recovering just time in time to nudge the ball away from Smolov.
The forward was soon replaced by Dzyuba, who struck almost immediately by heading another Golovin cross beyond a helpless Muaiouf in the 71st minute. Cheryshev hammered in a fourth with the outside of his left in stoppage time and Golovin capped a magnificent performance by bending in a last-gasp free-kick.
Russia meet Egypt in their next match on June 19 in Saint Petersburg, while Saudi Arabia will look to rebound against group favourites Rostov-on-Don a day later. (Agencies)