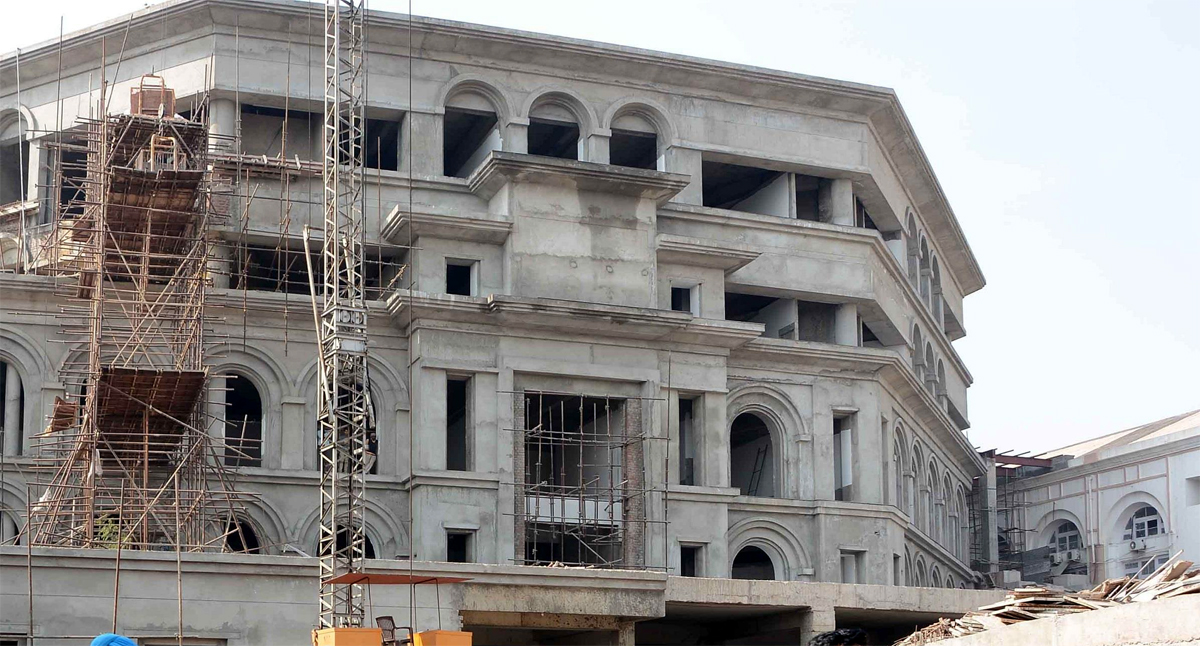 *Changes to be carried out as Council hall no more required
Mohinder Verma
JAMMU, Sept 10: The work on New Legislature Complex at Jammu will resume shortly as process has been set into motion for accord of Administrative Approval and release of balance funds. Moreover, changes will be made in some portion of the structure as Legislative Council hall is no more required in view of the abolition of the Upper House.
Official sources told EXCELSIOR that successive Governments kept on releasing funds for the New Legislature Complex after obtaining concurrence of the Finance and Planning Departments but Rules which lay thrust on accord of formal Administrative Approval were not taken seriously.
Against the estimated cost of Rs 194.34 crore, an amount of Rs 97.57 crore was released by the successive Governments to the executing agency—Jammu and Kashmir Projects Construction Corporation (JKPCC) and an expenditure of Rs 95 crore was made in the complex.
However, during the past few years the work remained stalled on the project as after bifurcation of erstwhile State into two Union Territories the administration noticed that Administrative Approval has not been accorded to the project in blatant violation of Rules.
Accordingly, directions were issued to the JKPCC to get the necessary exercise for obtaining Administrative Approval conducted and even plan modifications in the structure especially in the light of the fact that Upper House doesn’t exist anymore and space created for the same will be of no use unless some changes are carried out, sources informed.
“As earlier Architect of the complex expressed inability to carry out modifications in some portion of the structure the JKPCC floated tenders for engaging new Architect and this exercise has also been completed now”, sources said, adding “the JKPCC has also conveyed to the Department of Law, Justice and Parliamentary Affairs that modifications have been incorporated in the Detailed Project Report and the Corporation is ready for making detailed presentation on the same”.
It would be only after the approval to the modifications suggested by the Architect that formal Administrative Approval will be given to the JKPCC for restart of the work and balance funds will be released, sources said, adding the completion of project will take at least one more year from the date of resumption of work.
When asked about the escalation in cost of the project, sources said, “obviously the cost will increase because no work has been carried out during the past few years”, adding “the cost escalation will be worked out only after approval of the modified design, which provides for using of hall of Legislative Council and other connected space for multiple activities”.
It is pertinent to mention here that as per the provisions of the J&K Reorganization Act, there is no Legislative Council in the Union Territory of Jammu and Kashmir. While J&K UT has been provided with Legislative Assembly, the Union Territory of Ladakh doesn’t have either of the Houses of the Legislature.
The foundation stone of the project was laid by the then Chief Minister of erstwhile State of Jammu and Kashmir in the month of April 2011. The five storey building will have parking at Lower and Upper basements with capacity of parking for at least 150 cars/light vehicles and 100 scooters/ motor-cycles. It will have direct bridge to the Chief Minister’s Secretariat.
The project was initially started on the conceptual design but later complete DPR and design was prepared by involving a Delhi based consultancy. However, Administrative Approval was not obtained.
“The present Government has made it clear that Administrative Approval and Technical Sanction is must for start of work on any project and hopefully within shortest possible time the work on New Legislature Complex will recommence”, said an officer of the Jammu and Kashmir Projects Construction Corporation Ltd while wishing anonymity.