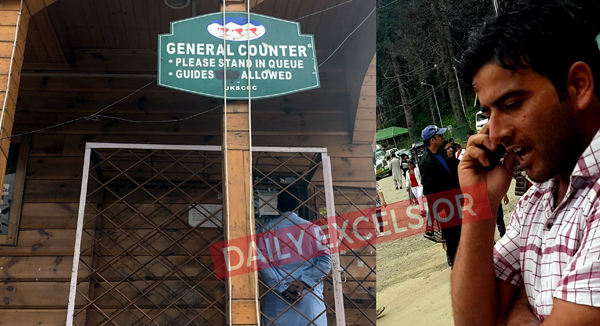 Suhail Bhat
SRINAGAR, July 30: Bringing bad name to Kashmir Tourism, the touts masquerading as tourist guides are seen selling Gondola tickets in black market at Kashmir’s famed tourist spot, Gulmarg.
On Sunday when the Gondola services resumed after 52-days of maintenance work the visitors thronged the famous tourist spot. A large number of visitors were seen queuing at the ticket counters to get passes for the Gondola ride. Amid all this, the black marketers pretending to be tourist guides were seen busy in wooing the visitors to buy illegal tickets.

Click here to watch video
The video in possession of the Daily Excelsior clearly showed a tout selling low cost tickets a few meters away from the sales counter. A Gondola ride usually cost Rs 1690 but the black marketers sell it at varied prices. Some sell it at exorbitant rates while others below the actual cost. “It all depends on the situation. If there is a rush of tourists they will sell it at higher rates and vice versa,” an official said. He added: “some people manage to get hold of official passes while others are allowed without tickets. It all depends on your connections in the Corporation,” a travel operator said.
When a team of Excelsior reached Gulmarg to ascertain facts, several touts in connivance with the Gondola officials were openly selling the tickets illegally.
The touts usually mingle with the tourists and approach them for tickets. When Excelsior Correspondent approached one of the men, he said: “I have a few official passes. I am charging you just Rs. 1300 per pass. The actual ticket will cost you Rs 1690. Give me the money and enjoy your ride. Do not tell anyone about it,” he said.
Asked about the authenticity of tickets, he said: “I have received these passes from the officials. None will question you. Just don’t tell them that you are guests,” he said. He then went on to make a phone call, indicating the involvement of a well organised network.
Around this time of the year, Gulmarg witnesses a huge rush of tourists and people have to wait in long queues at ticket counters. ” In order to save time and effort the visitors easily accept the offer,” an official said.
The black marketers buy tickets in the morning and sell them at exorbitant rates later. “They buy the tickets in bulk and then sell them to the tourists at double prices,” a tour operator said, adding to abet black-marketing, the officials of Corporation issue the tickets to the touts and close the counter early.
Sources said some employees in league with the officials have printed their own ticket books and they sell tickets in lower prices through touts.
Managing Director Cable Car Corporation, Shameem Ahmad, when contacted admitted the presence of touts near the ticket counters. He claimed that issue has been taken with the local police and strict action would be taken against them. “I spoke to the Station-House Officer and asked him to book them,” he said. He, however, asked: “The Enforcement Wing of the Tourism Department has to oversee these things.”
He said the black marketers have wrecked havoc in Gulmarg. “Despite cameras being installed everywhere the practice continues,” he said.