E-Paper
Home Social Trends They bring uniqueness to every film: Anil Kapoor on re-uniting with Madhuri... 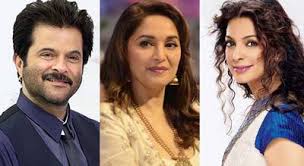 NEW DELHI: Anil Kapoor says he is looking forward to share screen space with his former leading ladies Madhuri Dixit and Juhi Chawala.
The 61-year-old actor will star opposite Dixit in “Total Dhamaal” and re-unite with Chawla for his home production “Ek Ladki Ko Dekha Toh Aisa Laga”.
“Total Dhamaal” will hit the screens on December 7 and “Ek Ladki Ko Dekha Toh Aisa Laga” is scheduled for February 1 release.
“It’s always a pleasure to re-unite with them. They are one of the best actors in our industry. They bring uniqueness to every film. After so many years they are still loved as much as they were before. I know very well why they became what they are. I understand the reason for their success.
“I have realised how good they are. They are just amazing. Madhuri in ‘Total Dhamal’ and Juhi in ‘Ek Ladki…’ are so beautiful and professional. They are still so hard working and young actors should learn from them,” Kapoor told PTI.
The actor has delivered hits like “Beta”, “Tezaab”, “Parinda”, “Ram Lakhan” and “Pukar” with Dixit, 51, while he has collaborated with Chawla, 50, on films such as “Deewana Mastana”, “Loafer” and “Jhooth Bole Kauwa Kaate”. (AGENCIES)