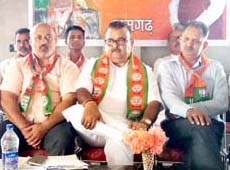 Excelsior Correspondent
SAMBA, May 18: MLA and former Minister, Chander Prakash Ganga, today said that the workers of the political parties have a significant role in spreading awareness about the Government schemes envisaging socio-economic emancipation of common masses for optimum outcome.
The Legislator exhorted upon the party workers to follow the ideology of founders of BJP like Din Dayal Upadhyay and Dr. Shyama Parsad Mukherji who gave new meaning to nationalism by the dint of their vision and leadership.
The MLA, while addressing at the Mandal Karyakarni  at Ramgarh, asked the party workers to imbibe in themselves humanity as their prime principle is to serve the people of their respective areas with a true spirit and camaraderie. “A worker of any party must first consider himself as servant of the people before his place in the party to succeed in his political career”, he asserted. He said that political representatives can play a vital role in growth and development of their respective areas as the people choose them out of high hopes and aspirations. He said that “we must not compromise while it comes the interests of the common masses”.
The MLA, while lashing out at the previous regimes for their mis-governance and misrule, said that those parties can never succeed in their vicious deeds which believes in divide and rule at the name of religion or region.
Highlighting the achievements of Central Government in all sectors, the Minister said that completely pro-people schemes like Fasal Beema Yojna, Health Insurance Yojna for poor, several insurance schemes, Beti Bachao Beti Padao, Ujjwalla Yojna etc are some of major initiatives in this regard.
The MLA appealed the workers to work with utmost dedication and sincerity for welfare and development of the people. He said that the aim of holding such events is to sensitize them about their duties and responsibilities towards their areas besides telling them about the decisions of the party High Command.
Jungveer Singh district president Samba, Keshav Dutt Sharma, Member State Working Committee,  Narinder Sharma block president Ramgarh,  Subash Verma general secretary, and many others attended the meeting.