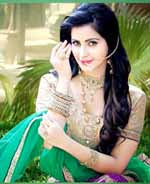 Excelsior Correspondent
JAMMU, July 13: Yet another artist of Natrang has brought laurels for the State of Jammu and Kashmir by being featured in lead role in the tele-serial ‘Ishqbaaz’ which is being run on Star Plus Channel. This time it is Subha Rajput, a talented and versatile daughter of the soil who went to Mumbai with a strong determination to find the space to showcase her talent and was able to achieve  the same.
Subha Rajput started her acting career by acting in one of the most popular Children play of Natrang, ‘Aap Hamare Hain Koun’ under the direction of Sh. Balwant Thakur. Later, she worked in other major plays of Natrang like Bawa Jitto, Mere Hisse Ki Dhoop Kahan Hai, Reed Ki Haddi, Miss World Undeclared, 30 Days in September, Tagore Diwas, Shayad etc. She has been a keen learner who always aspired for betterment.
She has also done Hotel Beautiful (Hindi feature film yet to be released), TVC for sprite, Edelweiss Tokio life Insurance etc., serials for different channels like Savdhaan India, Pyar Tune Kya Kiya, Darr etc. Other than this, she has also been a model for a number of reputed clothing and jewellery brands. A few prestigious projects are in pipeline which will soon be promoted on the National Channels.
Natrang director Balwant Thakur while complementing Subha Rajput on her this rarest accomplishment insisted that this can be taken as an inspiration that if you have talent, keen learning interest and determination, the success will come to your way but at any point one shall not compromise with hard work and quality.