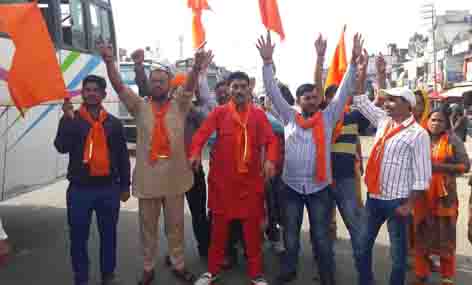 SAMBA, Oct 20: Shiv Sena Hindustan (SSH) held a protest demonstration against National Highway Authority at Vijaypur today. The demonstration was led by the State president of SSH, Ganesh Chaudhary who was present on the occasion along with the district president, Manish Sharma.
He shouted slogans against the NHAI, BJP and demanded that the Toll Plaza be closed at the earliest which would lead to a strong agitation in future as Shiv Sena Hindustan will call for Jammu bandh.
He accused the BJP of discriminating against the people of Jammu province. He said SSH endorsed the abrogation of Article 370 and 35 A as well as converting State into two UTs but it will not be allowed at the cost of people of Jammu.
Shiv Sena Hindustan warned to abolish the Toll Plaza at the earliest, otherwise it will launch a large-scale agitation, for which the NHAI and the BJP Central Government will be responsible.