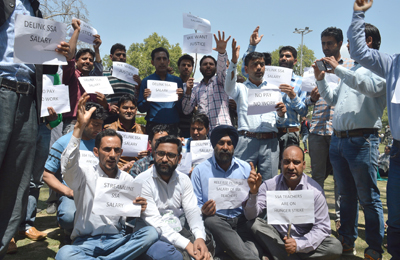 Excelsior Correspondent
SRINAGAR, Apr 28: Teachers working under Centrally Sponsored Scheme Sarva Shiksha Abhiyan (SSA) today observed hunger strike at Partap Park here to press for their demands.
Scores of protesting teachers assembled at Pratap Park and demanded delinking of their salaries. The protestors said that they have been demanding the streamlining of the salaries for last several years but government was unmoved.
“The Government has claimed several times that our salaries had been delinked but all the promises have fallen flat as we still have to wait for months for our wages. Their failure to streamline our salaries has badly affected our families”, they said, adding, Government was playing with the future of thousands of SSA teachers.
They said that there were nearly 50, 000 SSA teachers working with the Education Department, “almost 50% of the staff of primary and middle schools is SSA teachers. If Government wants that schools should function properly they should streamline our salaries”, a protestor said.
The protestors said they would intensify the protests if their demands were not accepted. “If the release of SSA salary is not streamlined soon we will launch a statewide protest,” a protestor said.