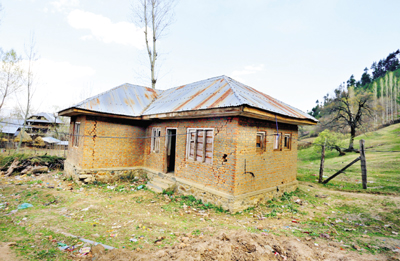 Waseem Ahmad
SRINAGAR, Apr 20:  Reflecting the sorry state of healthcare in the State, building of a Sub-Centre which was shattered in 2005 earthquake is still not restored at Krumbhura in Handwara area of North Kashmir’s Kupwara district.
As per local residents, the building of the Sub-Centre which caters to the dozens of villages was shattered in the earthquake and instead of restoring the building, the Centre functions from a rented room now.
They said only a single nursing orderly is on duty in the rented room who they said is not punctual either and an ANM nurse comes once in a month to see the patients.
“The Sub-center is in shambles due to the poor infrastructure, causing immense problems to the patients. The Sub-Centre is only on papers and lacks even the basic facilities of a Sub-center as no doctor is posted and hardly any medicines are available here,” Ghulam Mohammad Sheikh, a resident of Krumbhura said
He said expecting mothers are the worst sufferers as during the time of deliveries they have to hire vehicles and pay huge amounts of money to reach the Sub-District Hospital, Handwara. “We have to hire Taxis and it costs us about Rs 2000 for taking patients to Handwara town or other hospitals. Sometimes if there is no vehicle available, we have to carry the patients on our shoulders,” he said.
Another resident, Mohammad Sultan said that the lack of accommodation, medicos and infrastructure has severely affected the basic patient care in the area and many patients are forced to travel miles to district hospitals, Srinagar hospitals and other private clinics.
People of the villages accused the successive regimes of ignoring the health center which caters to thousands of people in the area. “The whole area comprising dozens of villages sans even basic healthcare facilities and people at the helm of affairs do not bother about the problems faced by the locals. Our leaders only visit us during the time of elections,” Bashir Ahmad, a resident of Krumbhura said
Chief Medical Officer (CMO), Kupwara and Director Health Services Kashmir, were not available for their comments on the Health Centre and problems faced by the people.