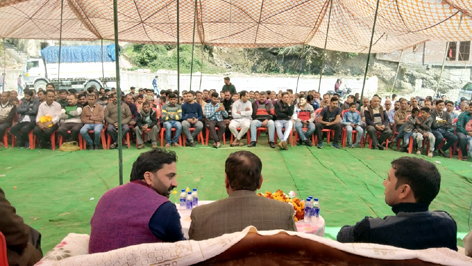 JAMMU, Feb 24: Former minister and Congress leader Sham Lal Sharma has slammed Pakistan for sponsoring terrorism in the Jammu and Kashmir state.
While addressing public meeting at Panchayat Sungal Samah, former minister said that the Pakistan is helping terrorist organisations overtly and covertly. Recent attack on CRPF convoy in Kashmir, was carried out in which more than 44 jawans were martyred. In the past also cowardice attacks were carried out by them on our security forces, despite surgical strike and other operations by the Army the Pak hasn’t learnt any lesson.
Sham said that the Pakistan is not accepting the responsibility of such incidents inspite of facts that the proofs are being provided to him. He further said that Government of India should now teach a lesson to the Pakistan so that he may not even think of doing such misadventures.
Taking strong exception to the acts of anti-national elements in the Valley who are in hand in glove with the militant organisations for carrying attacks on security men, Sham Lal urged upon the Government to take strict action against these elements. He said during the previous BJP -PDP regime, about 10,000 stone pelters were released.
Sharma lambasted previous Government over the decision and said security forces had to pay a heavy price for this wrong decision of the BJP Government. Not only this, the security forces got demoralised with such wrong decisions.
He expre-ssed anger over the new trend by the anti- national elements who during encounters of forces with terrorists indulge in stone pelting on troops. He said that the stone-pelters should be dealt firmly so that this trend is curbed.
“Anti-national sloganeering followed by stone-throwing on Jammu people was done with the intent to flare up communal passions at the behest of Kashmir-centric politicians and secessionist forces,” Sham said.
He expresses serious concern over registering cases against innocent and nationalist youth, while those committed crime allowed to scot free. He urged the State Administration for initiating a strict penal action against the “anti-national” elements and sought immediate withdrawal of cases filed against “nationalists” and innocent people of Jammu.

At SKIMS, 238 out of 283 suspected patients discharged: Director

At SKIMS, doctors skip lunch breaks to save PPE kits