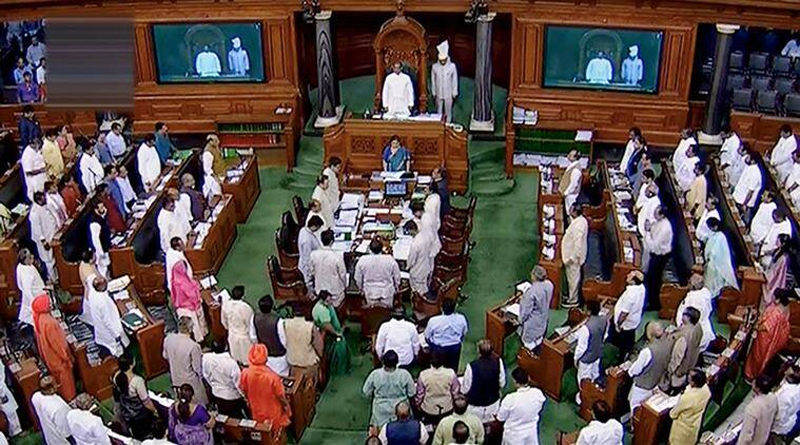 Nomination of migrants in Assembly may also be cleared

Quota for OBCs to be announced shortly

JAMMU, Dec 7: The winter session of Parliament which started today is likely to see bill for granting reservation to Other Backward Classes (OBCs), Pahari Ethnic Tribe, Paddari tribe, Koli and Gadda Brahmans as Scheduled Tribes (STs) and Valmikis, who had shifted here from Punjab in fifties, as Scheduled Castes (SCs).
Besides, the legislation to grant nomination to two Kashmiri migrants in the Legislative Assembly which has also been recommended by the Delimitation Commission in its final report is also expected to come up in the Parliament, sources told the Excelsior.
They said almost all concerned departments and Ministries have cleared extension of reservation to OBCs, quota under ST category to Pahari Ethnic Tribes, Paddari tribe, Koli and Gadda Brahmans and Valmikis in SC category and now the Ministries have to move legislation in both Houses of the Parliament for extending reservation to these sections.
There was no reservation to OBCs in Jammu and Kashmir. However, four percent reservation had been extended to Other Social Castes (OSCs). The Government had recently included some more Castes in the OSCs but withdrew the order later as reservation is now being accorded to OBCs.
The Central Government as well as many States and Union Territories have extended 27 percent reservation to OBCs. But, percentage of reservation to be granted to OBCs is yet to be revealed, the sources said.
The Pahari Ethnic Tribe, Paddari tribe and Koli and Gadda Brahmans will be extended reservation benefits under the ST category. However, the Government has already made it clear that reservation status of Gujjars and Bakerwals will not be diluted with grant of reservation to Paharis and others.
A sizeable population of Valmikis was also denied reservation in SC category as they were not given State Subject rights in view of Article 370 due to their migration from Punjab. They are also being included in the SC category now, the sources said.
As far as Kashmiri migrants are concerned, reservation of two seats in the Legislative Assembly have been recommended for them by the Delimitation Commission headed by Justice (Retired) Ranjana Prakash Desai in its final report.
The Delimitation Commission had suggested that the Government could also consider grant of reservation to Pakistan occupied Jammu Kashmir (PoJK) refugees.
A final decision on PoJK refugees is to be taken by the Central Government.
There have been 24 seats reserved in Jammu and Kashmir Assembly for the PoJK refugees. There was demand from some PoJK organizations and political parties that eight seats should be reserved for PoJK refugees in the Legislative Assembly taking into account the numbers of people who migrated here.
Based on recommendations of Justice GD Sharma Committee report, the Government has also added Pahari Ethnic Tribe, Paddari Tribe and Koli & Gadda Brahman for accord of Scheduled Tribes (ST) status. The National Commission for Scheduled Tribes has already cleared the proposal.
Gujjars and Bakerwals in Jammu and Kashmir already enjoyed ST status and the Government has clarified that their rights will not be diluted.
Paddari tribe is settled mostly in Paddar area of Kishtwar district which is one of the remotest areas in erstwhile Doda district. However, Koli & Gadda Brahmans are spread in different areas. Paharis are mostly based in twin border districts of Rajouri and Poonch in Jammu region and Baramulla and Kupwara in Kashmir division.
Nine seats in 90-member Assembly of Jammu and Kashmir have been reserved for the STs. Five seats are reserved for STs in Jammu division and four in Kashmir.
The STs enjoyed reservation in jobs, education etc, but they were denied political reservations in Jammu and Kashmir for a long time though such a reservation existed in Lok Sabha and Assemblies across the country. This was, however, after abrogation of special status of Jammu and Kashmir in August 5, 2019 that the Government extended political reservations to STs in J&K.
The Scheduled Castes have eight percent reservation in the Union Territory and, for them, seven seats, like earlier, are reserved in the Legislative Assembly. However, out of five, no Lok Sabha seat in J&K is reserved.