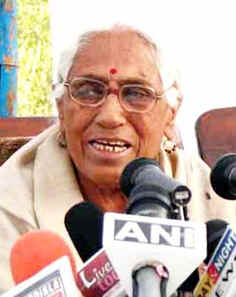 Dr Ved Ghai
Dr Ved Kumari Ghai is one of the outstanding Sanskrit scholars, a renowned social worker and a prominent citizen of Jammu and Kashmir. She is former Head, PG Sanskrit Department, University of Jammu, an author of more than a dozen scholarly books including her celebrated work on Nilamata Purana and has bag full of awards and honours. She is presently chairperson of Gandhi Sewa Sadan, Vasudev Katumbkam Welfare Society, member of Shri Amarnath Shrine Board and associated with a number of literary and social organizations.
In a recent wide-ranging interview with me at her Trikuta Nagar residence, Jammu, Prof Ghai talked about her up bringing, education, journey of life, literary contribution, social work and her views on the future of Sanskrit language. Answering a question about fate of rich Sanskrit language in the country, Prof Ghai said: “The situation is not satisfactory and for it both the Central and the State Governments are responsible . This language of the people is declining and needs urgent special attention.
Expressing the hope that Sanskrit is the soul of India’s heritage, repository of vast knowledge and at the basic root of all other Indian languages and it will live always as   in it  lies all our knowledge of science and spiritualism.
Language of Sanskars
Stressing need for public awareness about this language of Sanskars, she  asserted that there is comparatively wide spread learning of Sanskrit south India and some other parts.
Referring to J&K State, Prof Ghai said Sanskrit is being taught at Post Graduate level both at Kashmir and Jammu Universities but lamented that it is not a subject of study in the schools and colleges. While Jammu University is doing good job, she pointed out that PG Department of Sanskrit in the Kashmir University is still functional and some Muslim boys and girls are doing MA ( Sanskrit). She also informed that Oriental Languages conference is being organized during October this year in the Kashmir University. Prof Ghai called upon all the agencies—-official and non-officials—- to take all possible measures to promote Sanskrit language.
In addition to teaching and research work at Jammu University, till her retirement in December, 1991, Dr Ghai has also taught Panini’s grammar and Sanskrit literature at the Institute of Indian Studies, Copenhagen University, Denmark (1966-67 and 1978-80).
Literary, Social Works
Dr Ghai is recipient of Certificate of Honour by President of India for her scholarship in Sanskrit and was awarded Gold Medal on Republic Day 1995 by J&K Government for her social work for women and children. She has also contributed a lot in the field of health care for the downtrodden and neglected families particularly residing in the backward and slum areas. She was also conferred with President’s Award for Sanskrit in 1997. She was founder member of Apna Ghar project.Dogra Ratan award was given to her in 2005, life time achievement award in 2009 and Stri Shakti Puraskara in 2010.
Hopeful of Future
It is generally believed that she leaves deep imprints on the minds of the young students and scholars. Prof Ghai told me about her total commitment to the Sanskrit language as a life-long pursuit. Her work on Nilamata Purana  is of high order. She has devoted herself with the Khadi movement as an associate of Krishna Mehta, founder of Shri Gandhi Sewa Sadan.
Born on December 16, 1931, in Pratap Mohallah, Jammu, Ved Ghai had her early education in Jammu and did MA in Sanskrit from Punjab University in 1953 with first class first. She also did MA (Ancient Indian History and Culture) in 1958 and PhD in Sanskrit in 1960 from Banaras Hindu University (BHU).
Dr Ghai joined Government College for Women, Parade, Jammu as Lecturer in Sanskrit and retired as Professor and head of the PG Sanskrit Department, Jammu University on December 31, 1991 but her zeal grew  year after year.
Dr Ghai writes in Sanskrit, Hindi and Dogri with equal ease and has to her credit a number of research papers. A mention may be made of her books in Dogri Narendra Darpana, Dogri translation of Vedic hymns in verse, Dogri translations of Patanjali’s Yoga Sutra’s. She has remained President, Dogri Research Institute, Jammu; Vice-President, Dogri Sanstha, Jammu for six years. Dr Ghai was involved with Dogri-Dogri dictionary.
Asked to reveal the secret of her inexhaustible physical and mental strength and a strong will to perform, Dr Ghai stated that she is highly motivated by the mission of serving the society, particularly its vulnerable section. She had a good word for her husband Prof. Dr Ram Pratap, who is also known for excellence in Sanskrit literature and both do  complement and supplement each other in literary and social work.
(Starline Syndicate Service)