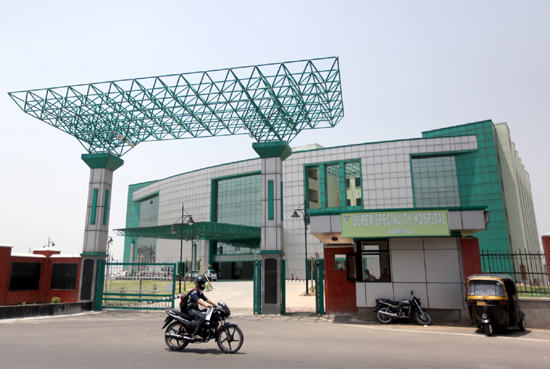 JAMMU, Oct 19: The end stage kidney disease patients continued to suffer due to the non-serious attitude of the authorities of Government Medical College and Hospital (GMCH) Jammu as even after spending crores, the Renal Transplant Centre in Super Speciality Hospital (SSH) Jammu is still non-functional.
Official sources said that in the year 2016, PDP-BJP Government in the erstwhile J&K State had announced to establish a Kidney Transplant Centre in SSH Jammu and sanctioned Rs 50 crore for the same so that the patients from Jammu and adjoining districts do not have to go outside for availing this facility.
Accordingly, sources said, an amount of Rs 15 crore was sanctioned last year after the proactive and visionary intervention and efforts of Financial Commissioner, Health and Medical Education, Atal Dulloo to start the facility by raising basic infrastructure and purchasing important high end machinery and equipment in 1st phase, and the amount was transferred to Principal GMC Jammu under Languishing Project.
“As per the DPR of the project, in second phase additional infrastructure which include dedicated blood bank, high tech state of art Microbiology and Biochemistry labs, in-house Radiological and Imaging as well as HLA typing facilities etc has to be raised for which remaining funds to the tune of Rs 35 crore will be released by the Government,” they added.
They said though all the funds to the tune of Rs 15 crore released in 1st phase have been spent and the basic infrastructure, equipment and machinery are in place but the Renal Transplant Centre is yet to be made functional by the GMC administration.
Sources said the Government of J&K and Department of Health and Medical Education being serious and committed in starting the Renal Transplant Centre, made very important regulatory steps last year and made Central Transplant of Human Act extended in the Union Territory of J&K but due to non-seriousness of the GMCH authorities, the people are still deprived of the facility.
“For end stage or stage 5 Kidney disease, there are two treatment options available i.e. dialysis or kidney transplantation and kidney transplantation is always recommended because quality of life and survival (life expectancy) are often better in it than in people who are treated with dialysis on long term basis but authorities of GMC Jammu have failed to start the Kidney Transplant Centre despite spending crores on it,” they regretted.
They further said that many candidates for kidney transplantation from Jammu province are suffering as they have to move outside J&K for availing the services where they are usually put on a transplant waiting list and have to depend on dialysis until a kidney is available. This cost the poor patients very dearer, they added.
Sources further informed that ex-Principal GMC Jammu Dr Sunanda Raina before her superannuation got SOTTO services extended and established at SSH Jammu and also got the Centre registered with National Organ Transplant Programme of India, which is an apex centre for all India activities of coordination and networking for procurement and distribution of organs and tissues and registry of Organs and Tissues Donation and Transplantation in country.
“Further, necessary staff including Joint Director of Regional Organ and Tissue Transplant Organization (ROTTO)/State Organ and Transplant organization (SOTTO) who is drawing salary of Rs 87000 per month and Transplant Coordinator (drawing salary of Rs 30000 per month) have been appointed under National Organ Transplant Programme for establishment of SOTTO but they have no work to perform in light of totally non-functional Renal Transplant Centre at Jammu,” sources rued.
They further informed that a dedicated ambulance and its driver have been also appointed under the scheme by the Government, which shows its commitment to establish Renal Transplant at SSH Jammu but due to slackness of GMCH authorities, even a single patient has not been registered or operated for Renal Transplant in SSH Jammu.
“Even GMC authorities failed to coordinate and organize trainings for various cadre of workers, create dedicated website, establish brain dead certification committee as well as dedicated counselling centre for the kidney patients which are requisite to start the Centre. They also failed to extend Ayushman Bharat Health Insurance Scheme to the poor people seeking kidney transplantation,” sources regretted.