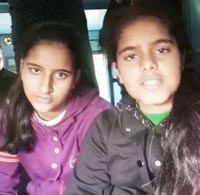 JAMMU, Dec 23: Junior Roll Ball players of the State flayed organisers and the Department of Railways for not getting proper reservation to participate in the Junior National held at Chhattisgarh recently.
While criticising the authorities who left them in the lurch, the young sportspersons said that they had to participate in a National Level event before travelling for two and a half days in a train, adding that they had to face multiple problems without proper reservation.
A team of 22 players, both male and female in one voice said that on the one hand Government involves a huge number of youth in Central Government’s Khelo India Scheme, while on the other hand it fails to provide budding sportspersons proper atmosphere and facilities.
“It is very much painful to travel for days together in a train without reservation. We are at a loss to understand as to why the funds for sports and other allied activities are not released by the Government in time to make all arrangements in advance. In such circumstances expecting good show from the players is like ragging a bull,” the players lamented.
They further said that their in-charges had applied for reservation around a week before their journey, but failed to get the reservation, adding that there should be special reservation quota for the sportspersons.
However, when contacted the officials of the concerned authorities said that they could not manage proper reservation because of cancellation of few trains of this route.