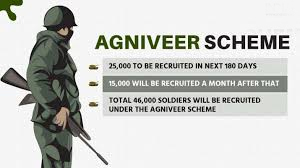 If the fate of the Agniveers after they are relieved from the defence forces after completing the four year term as per the scheme of Agnipath, is to be made more secure and instilling confidence and an assurance in the aspiring young persons , there must be provisions for absorbing the well trained, highly disciplined and even qualified Agniveer personnel in different jobs both in the public as well as in the private sector. It is a national cause if seen from a broader perspective and every institution must contribute towards it depending upon its institutional strength and absorbing capacity. States and Union Territories can, therefore, offer reservations in jobs especially pertaining to Police, Home Guards and other departments to the Agniveers. A few states have already shown their commitments, others should as a natural corollary follow suitably.
Going a bit deep into the Agnipath Scheme of recruiting strong, agile, enthusiastic and assertive young persons of the country in our defence forces, it will be felt that the scheme completely fitted into the dictating circumstances and requirements of our armed forces as also on account of the compulsions of modern day warfare. Though the scheme arguably could have more leverage for periodic review which could vouch for required changes in it if any, by way of more provisions added to it and amendments made to making it more attractive and forceful, yet all the States and UTs were required and expected of making this scheme a success in the interests of the country’s security concerns. In this connection, it is quite heartening to not that the UT Government of Jammu and Kashmir has decided to reserve 10 percent of jobs for Agniveers in prestigious Jammu and Kashmir Police force. Jammu and Kashmir Police has proved itself time and again next to none in the country in discharging duties even under challenging circumstances in the process of which many personnel have been attaining martyrdom as well.
Not only that, during the most trying hours of the aftermath of natural calamities like the one recently happened around the Holy Amarnath Shrine where its personnel showed exemplary courage, fortitude and displayed highest sense of duty in providing rescue and relief measures to the victims and the sufferers of the calamity and worked shoulder to shoulder with NDRF, SDRF, the Army and the ITBP. Lieutenant Governor Manoj Sinha while commending the role of those who were committed in the process to nation building, made a due mention of all this in the public outreach programme “Awaam Ki Awaz” which has assumed its own importance and relevance in articulating and exchanging views on different issues between the Government and the public. The programme is broadcast on every third Sunday on All India Radio, Jammu and Kashmir. Since people especially the ones from younger age groups keep communicating with the Lt. Governor on various issues as also giving suggestions through this programme, in response to that especially the two young persons hailing from Jammu, the announcement about reservation in jobs was made in the JK Police for (retiring) Agniveers.
Not only in respect of reservation in the Police force, based on the suggestions from the two young Jammuites again, facilities for coaching and providing other facilities in order to help the young aspirants join Agnipath successfully too has been promised by the Lt. Governor which will be an added contribution towards Agnipath and Agniveers. Needless to add, regardless of sustained criticism from some opposition parties to the Agnipath scheme, the overwhelming and tremendous response of the country’s youth towards Agnipath can be seen by as many as 7.5 lakh applications having been received by the Indian Air Force (IAF) for 3000 Agniveer positions. Not only this, the IAF has been receiving requests for extending the deadline though the window of the entire online application for recruitment has now been closed by it.
However, while the scenario depicts the quantum of enthusiasm as also the will of the strong young to serve the nation by being proud Indian Agniveers , at the same time, it is a barometer of imagining the available huge Human Resources in this vast country which is young, strong, talented, promising but unfortunately ”untapped” or not getting jobs. However, that issue though of greatest import, is for the Economists and economic policy planners to think over and come out with suitable solutions.