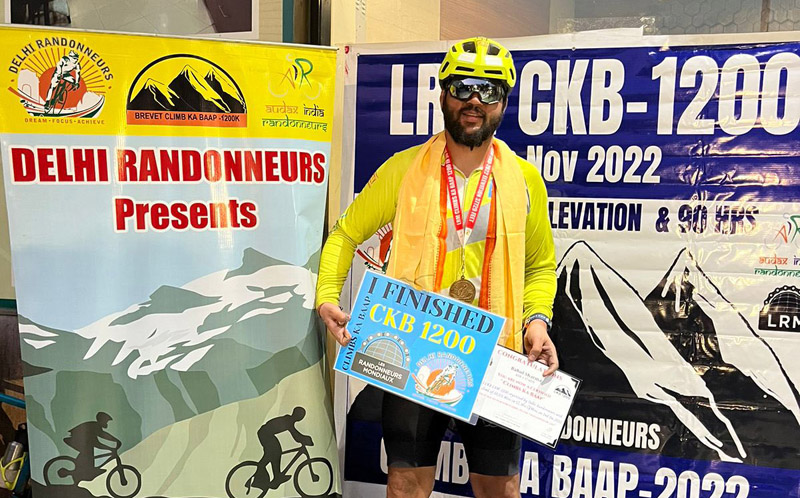 Excelsior Sports Correspondent
JAMMU, Dec 6: Beating chilly winters, Rahul Sharma (AIR-17409) an ultra cyclist and runner from Jammu has become the first cyclist from J&K to complete 1200 kms ride known as LRM (Les Randonneurs Mondiaux), organised by AIR (Audax India Randonneurs) in association with ACP (Audax Club Parisien).
The 1200 kilometres LRM organised by Delhi Randonneur Started at 00:00 hours on 2nd Dec 2022 from Kundli (Delhi-Border)-Timber Trail-Chintpurni-MC Leodganj-Baijnath-Dharamshala-Kangra and back on same route to Kundli with total elevation gain of 37729 ft.
This is the toughest ride in India as it goes to the hill terrain and with chilly weather and is very famous among long distance riders with the name of ‘Climbs Ka Baap’. Total time to complete LRM was 90 hours and it has various checkpoints in between as well and riders have to reach at check point in time else declared disqualified.
Rahul has already completed the 1000km BRM in 2021 and has 3 Super Randonneur title in his bucket. Super Randonneur is one who completes 200, 300, 400, 600 kms distance in one year and a rider can have multiple SR titles but he has to complete all four rides for one single title. Audax India congratulated Rahul Sharma who joined the Club with LRM finishers of India and abroad.