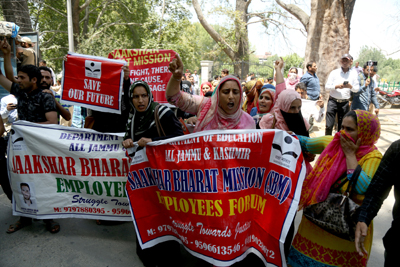 JAMMU, Aug 13:  Former minister and PCC chief G A Mir today alleged that PDP-BJP diluted the powers of Panchayats for vested interests  and caused much damage to the grass- root  level democratic institutions.
Addressing meeting of party functionaries from Bishnah, Bani,  Mendhar and Jammu East here today, Mir said  BJP was equally responsible in bringing a retrograde amendment to the Panchayat Raj Act which had diluted the power and provisions of 73rd amendment of the constitution but it was opposition especially Congress which had launched a struggle against it and finally the Governor has now restored the previous position of direct elections to the Sarpanch.
Reacting to the Prime Minister Modi’s statement regarding his party’s commitment to strengthen PRIs in the State, PCC  chief  questioned as why the Centre Government and the BJP high command did not intervene to advise his party in the state, to stand against the anti-democratic and retrograde step to dilute the  provisions of 73rd amendment, despite strong protests by the Congress and other opposition parties and representatives of Panchayats. PDP-BJP Government brought about the anti-democratic amendment through state legislature, against tough opposition by Congress and all opposition parties. The Governor had withheld the assent and sought clarifications but again PDP-BJP pressed for same and got it done. Congress launched a dharna at Raj Bhawan against it, on July 8, 2016 and state wide movement in the state. Fortunately, the Governor has now undone the same and restored direct elections to Panchayats. How can BJP and Prime Minister tell to the nation that his party tried to strengthen PRIs in the state.
While stressing upon the workers to  gear up for ULB and Panchayat elections, Mir said that PM Modi is not aware that his party’s Govt in the state had taken away the direct voting rights in the Panchayats. It was Congress which brought about consensus on 73rd and 74th amendment and the same were in corporated in the state laws on March 14, 2014 and now elections would be held as per provisions of 73rd and 74th amendments.
Senior leaders including Ram, Raman Bhalla, GM Saroori, Ravinder Sharma, Vikram Malhotra, Namrata Sharma and others  listened to leaders and prominent delegates of different constituencies about the prospects of the party, to chalk out poll strategy.

Ministers on sabbatical in J&K at public expense: Harshdev