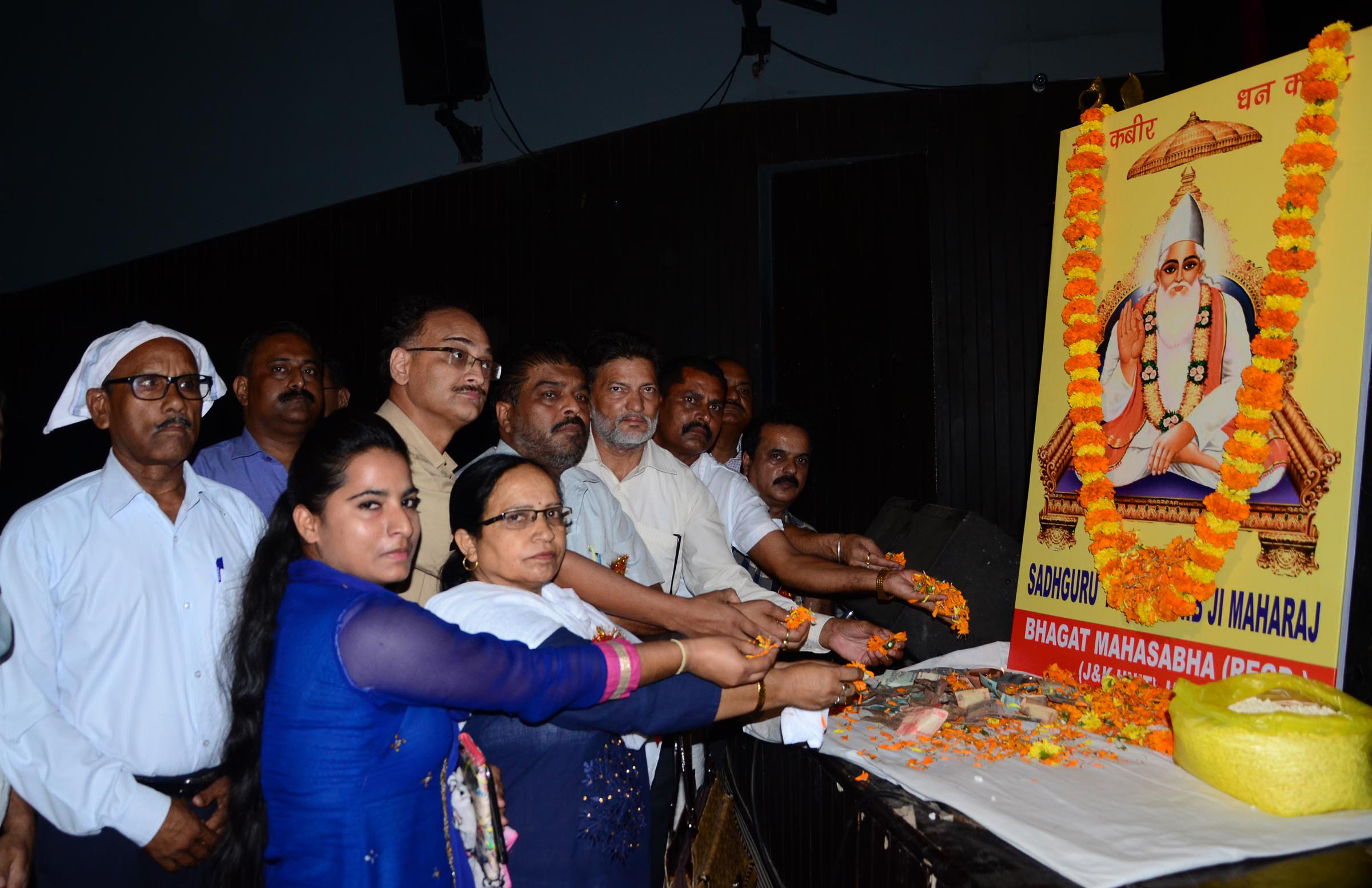 JAMMU, June 28: Various functions were organized across the region in connection with the 620th `Parkash Utsav’ of Sant Kabir ji Maharaj today.
Bhagat Mahasabha J&K Unit organized an impressive function at Abhinav Theatre here today. A large number  of devotees participated in the programme. Former Vice Chairman Scheduled Castes Advisory Board, Bhushan Lal Dogra was the guest of honour  while Raj Kumar Bhagat, national president Bhagat Mahasabha was the special guest.  Chanchla Bhagat, daughter of Shaheed Bhagat Amar Nath  who laid down his life for the cause of community was the chief guest and was accorded rousing reception by the community members. Pawan Bhagat Chairman of the unit also shared the dais and addressed the impressive gathering.
The programme commenced with the garlanding of portrait of Sant Kabir Ji, followed by Satsang – Kirtan. The speakers threw light on the teachings of Sant Kabir  and asked the people to follow the same. Sweet water Shabeels were raised at various places by the devotees and community lunch ( Langar ) was also organized. Piran Ditta, president Guru Ravi Dass Sabha, Kahinder Bhagat, Sansar Chand, Dr Zabeer Ahmed general secretary JKRCEA, B R Rao Prof Kali Dass, Tarsem Bhagat and  many others also spoke on the occasion.
All J&K Shri Sadguru Kabir Sabha celebrated 620th Prakash Utsav (Kabir Jayanti)  at its headquarters,  Kabir Bhawan, Chak-Avtara, Bishnah with great enthusiasm  and religious fervour today. The function was largely attended by the devotees/followers of Kabir Sahib from different parts of the State. The day started with offering garland of flowers to the statue of Sant Kabir ji at Kabir Rotary near Bus Stand.
A spiritual discourse was delivered by Mahatma Bhagwan Dass Ji, Udas Marg, RS Pura & Baba Dina Nath Ji (Punjab wale) on the teachings of the great saint with special reference to Kabir Vani.
President of All J&K Sadguru Kabir Sabha, FC Bhagat while addressing the gathering said that where there is truth, no religion is required because truth itself is a great religion. He said that Kabir was a living spirit of God  and preached the inner richness of human values. Bhagat also appealed to the Bhagat Kabir Panthi Samaj that this day shall be celebrated as a beginning of the social revolution in India because the philosophy of Kabir is irrespective of any religion, caste or creed & it is based on equality amongst all. Kabir fought his life against social discrimination & advocated that all human on this earth are equal.
Among others who attended  and spoke on the occasion includes  Bhushan Dogra, Prof. Garu Ram (Ex-MLA), GR Bhagat, Prof. Ashok Bhagat, Yash Pal, Chaman Lal,  Dr Gurdass Ram, Pardeep Bhagat, Manohar Lal,  Subhash Bhagat & Ravinder Bhagat.
Another function in this connection was held at Ward No. 8 R S Pura under the leadership of  Dr Rajesh Bhagat while Bai Kuldeep Singh recited Shabad Kirtan.Santosh Bhagat and Swarn Bhagat also spoke on the occasion. Another function was held at 137 Bn CRPF, SK Police Academy Omara Morh Udhampur. The participants offered special prayers. SSP Randhir Singh, Addl SP Tenjinder Kour and Dr Gurdit Singh were also present on the occasion.
National Conference Provincial President of Devender Singh Rana described Sant Kabir as an epitome of righteousness, adding that his philosophy in verse will continue to guide humanity and help society overcome hate, animosity and bitterness.
“Sant Kabir has blessed the humanity with eternal message of peace, love and tranquility and those following these teachings would never do injustice to others and work for just society based on equality”, Rana said while recalling the teachings and philosophy of the great saint at a function at Kabir Ashram at Narian in Katal Batal Panchayat of Nagrota Assembly Constituency. Sant Sudershan Ji Maharaj was also present on the occasion.
All Megh Sudhar Sabha also organized a special function at Old Rehari, Jammu in this connection and paid floral tributes to Sant Kabir Dass ji. The function was held under the leadership of  Behari Lal Bhagat and  Nareder Dutt  and others. Former minister Ram Pal also spoke on the occasion.