Delhi : The Indian Army is responding to firing from across the border in Jammu and Kashmir’s Poonch district on Tuesday. The firing is a result of Pakistan violating the ceasefire along the Line of Control (LoC), said the army

The firing started in the Mankote sector in Poonch around 4:30 am on Tuesday, they added.

In September alone this year, the Pakistan army has violated the ceasefire 44 times this month.(Agencies) 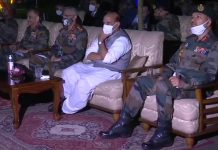 ITBP to set up 47 new outposts on India-China border