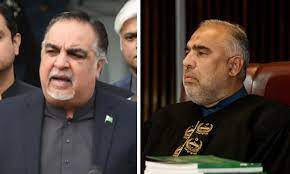 Islamabad, March 25 (UNI) The Pakistan Tehreek-i-Insaf announced that it had disowned nearly a dozen ‘unauthorised’ bank accounts that were opened and operated by, key leaders such as National Assembly Speaker Asad Qaiser, Sindh Governor Imran Ismail and Khyber Pakhtunkhwa Governor Shah Farman, Dawn reported on Friday.
The party revealed this is written replies submitted to the Election Commission of Pakistan (ECP) on March 15, in response to questions raised by a report of the commission’s scrutiny committee.
In its 112 reply, the party disowned 11 such accounts and said a total of Rs23.22 million was transferred to them from PTI’s Central Accounts. The party also admitted that an amount of Rs57m was deposited in the 11 accounts from local sources, which were never accounted for with the Central Accounts.
In its defence, the party claimed that the moment it learned about the bank accounts, it initiated ?an appropriate and required exercise? to ascertain whether the accounts pertained to PTI, details of the persons who opened and operated the accounts and details and nature of all financial transactions carried out.
The PTI said they were provided with information in this regard by the banks in response to the party’s request, the reply said. The party said that it carried out a detailed analysis and review of the information and bank statements and identified the individuals who opened and operated these accounts.
The PTI further said that the 11 accounts were operated by individuals who were not authorised by the competent authority and were being operated without the knowledge of the party’s finance department.
Others named as operators of ‘unauthorised accounts’ include Senior Punjab Minister Mian Mahmud-ur-Rasheed, former president of PTI Punjab late Ahsan Rasheed, former MPA from Sindh and renowned architect Samar Ali Khan, former MPA from Sindh Seema Zia, Sindh MNA Najeeb Haroon, former president of PTI Sindh Jahangir Rehman, former PTI general secretary from KP Khalid Masood and close friend and adviser of Imran Khan, late Naeemul Haq.
Yet others on the list include M Ahsan Naveed, Syed M. Javaid, Sheikh Awais, Zafarullah Khan Khattak, Hamidul Haq, Sulman Bashir Awan, Sheikh Muhammad Hussain, Mian Muhammad Farooq, Bashir Ahmad, Muhammad Anwar, Rushna Shoaib, Farah Naz and Muhammad Saleem Khan.
(PTI)