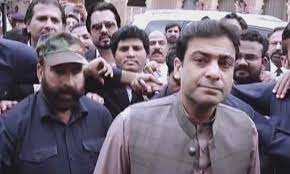 Islamabad, May 20: The Lahore High Court will hear the plea filed by PTI challenging Hamza Shahbaz’s election as the Punjab chief minister on Friday, Geo News reported. A bench, headed by LHC Chief Justice Ameer Bhatti, will conduct the hearing on the plea filed by PTI MPA Sibtain Khan and others. The petitioners have claimed in their plea that the police forced the PTI and PML-Q members out of the Punjab Assembly to prevent them from exercising their right to vote at the behest of Hamza, which led to riots and chaos, after which Hamza was declared the new Punjab CM. They also questioned the presence of policemen inside the provincial assembly, adding that the secretary of the Assembly had not allowed non-members to enter the assembly, while also alleging that the deputy secretary had called 300 non-members inside the house.
The petitioners have alleged that bogus voting had taken place in the election, claiming that PTI MPA Ahsan Saleem Baryar did not cast his vote but his name was on the voters list. They requested the court to declare the election of Hamza Shahbaz as the Punjab chief minister be declared null and void.
Meanwhile, Punjab Assembly speaker Chaudhry Pervaiz Elahi, who was also a candidate for the CM’s slot, filed a separate plea challenging Hamza’s election, nomating Hamza and other individuals concerned as respondents in the case. Elahi has maintained that Hamza does not have the requisite support to be elected as the Chief Minister in light of the Supreme Court’s order, while claiming that Deputy Speaker Dost Muhammad Mazari declared Hamza CM-elect unjustly. In few days earlier, the Pakistan Supreme Court in a 3:2 split decision, namely, Chief Justice of Pakistan Umar Ata Bandial, Justice Ijazul Ahsan, and Justice Munib Akhtar agreed that dissident members’ votes should not be counted, while Justice Jamal Mandokhail and Justice Mazhar Alam Khan Miankhel disagreed with the verdict.
The plea requests the court to restrict Hamza from working as the Punjab Chief Minister till a final decision is not taken in this case, and also seeks cancellation of Hamza’s oath as the CM and orders for a new election for the CM slot. (UNI)