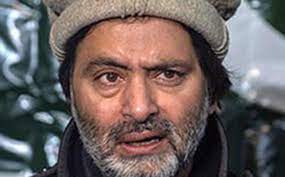 Islamabad, May 20: Pakistan has condemned the conviction of Kashmiri separatist leader Yasin Malik by a Delhi court in a case related to funding of terror activities in Jammu and Kashmir, after he pleaded guilty to all charges framed against him.
Malik, a Hurriyat leader and chief of the banned Jammu and Kashmir Liberation Front (JKLF), was convicted on Thursday in a terror funding case dating back to 2017.
He is currently lodged in Delhi’s Tihar Jail.
“Hurriyat leader Mr. Yasin Malik has been convicted today in a manifestly dubious and motivated case, dating back to 2017, filed against him by the National Investigation Agency,” Pakistan’s Foreign Office said on Thursday.
“Predictably, the one-sided case has not only convicted Mr. Yasin Malik on fictitious charges in defiance of the Universal Declaration of Human Rights and International Covenant on Civil and Political Rights, but also attempted to make conjectural insinuations about Pakistan,” it added.
On Wednesday, Pakistan summoned India’s Charge d’Affaires here to the Ministry of Foreign Affairs and handed over a demarche to him conveying Islamabad’s strong condemnation of the framing of “fabricated charges” against Malik.
Malik recently pleaded guilty to all charges, including those under the stringent Unlawful Activities Prevention Act, before a Delhi court in a case related to alleged terrorism and secessionist activities that disturbed the Kashmir Valley in 2017.
India has repeatedly told Pakistan that Jammu and Kashmir “was, is and shall forever” remain an integral part of the country. It also advised Pakistan to accept the reality and stop all anti-India propaganda.
New Delhi has also told Pakistan that it desires normal neighbourly relations with Islamabad in an environment free of terror, hostility and violence. (PTI)