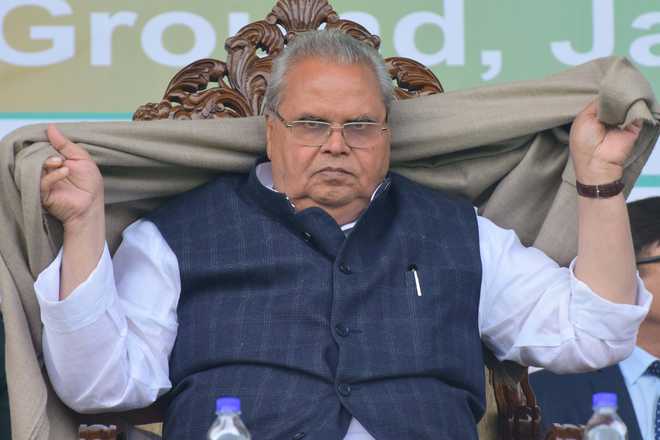 ‘No panic should be created unnecessarily’

Excelsior Correspondent
JAMMU, Aug 3: Governor Satya Pal Malik said today that the State has no knowledge of any changes to Constitutional provisions and hence no panic should be created by unnecessarily linking this security matters with all kind of other issues even as he maintained that he has talked to everybody in New Delhi and nobody has given him any hint that what they will do.
Speaking to news channels and in an official statement issued by the Raj Bhawan after his meeting with National Conference vice president and former Chief Minister Omar Abdullah, Malik, without mentioning 370 and 35-A, said there were rumours about two Articles and trifurcation (of the State), which falls in the domain of Parliament and can’t happen overnight.
“These issues have to be put in domain followed by discussion in Parliament. Only two days are left for the Parliament session to conclude. There is no need to worry,’’ he said.
Asserting that he has talked to everybody in New Delhi and nobody has given him any hint that what they will do, the Governor said: “Somebody is saying there will be trifurcation, somebody says Article 35 A and 370. Nobody has discussed these things with me either Prime Minister (Narendra Modi) or Home Minister (Amit Shah)’’.
Referring to tense situation in the State especially the Kashmir valley, Malik said only rumour mongering is going on. “It’s a very routine thing here. If you sneeze at Lal Chowk, it becomes an explosion when it comes here (the Raj Bhavan). Unnecessary panic is being created by vested interests, especially some political parties’’.
On his meeting with National Conference leader Omar Abdullah and other political leaders, the Governor said they’ve gone satisfied.
“Whatever they expected from me I did. As far as I know, there’s no inclination that something’s going to happen here. I don’t know about tomorrow. That’s not in my hands. But till today there’s nothing to worry,’’ he added.
On security advisory for Shri Amarnath Ji pilgrims and tourists, Malik said it was the Government’s responsibility to see safety of pilgrims and tourists as lot of terrorists are sitting across the Line to cross here and most of them are suicide bombers. “If something happens, that will have repercussions all over the country. We wanted to avoid that’’.
Meanwhile, Malik conveyed to a National Conference delegation led by Omar Abdullah which called on him at Raj Bhavan that the State has no knowledge of any changes in the Constitutional provisions and assured that the deployment of additional paramilitary forces was purely for security reasons.
A statement released by the Raj Bhavan said the Governor informed the delegation that the security situation has developed in a manner which required immediate action.
“There were credible inputs which were available to the security agencies regarding terrorist attacks on the Amarnath Yatra. There has been intensified shelling on the LoC by Pakistan which was responded to effectively by the Army,” the Governor told the delegation.
He said that a press conference was addressed by the Army and the State police in which they briefed the media about how they foiled terror groups’ sinister plans and also displayed weapons and ammunition they seized.
“The seriousness of the threat required immediate action,” the Governor said, adding: “A pure security measure is being mixed up with issues with which it has no connection. That is the cause of the panic’’.
It is in this security context that the Government had issued an advisory on Friday asking Yatris and tourists to return as soon as possible, he said.
“These are a vulnerable group of people who do not know the area and are extremely vulnerable to a terrorist or a fidayeen attack. It is the responsibility of the State to provide security to all its citizens. Therefore, as a precautionary measure, yatris and tourists have been asked to return. This is to ensure that no terrorist attack takes place on them,” the Governor said.
He added that security to the citizens has to be provided by the State even at some inconvenience, which is being done.
Malik requested the political leaders to ask their supporters to maintain calm and not believe in exaggerated and unfounded rumours being circulated all around.

Shah to visit J&K
Union Home Minister and BJP president Amit Shah is likely to undertake a visit to Jammu and Kashmir after completion of the ongoing Parliament session to review security situation in the State.
Reports said exact dates of the visit are being finalized.
However, during the visit, Shah is likely to visit all three regions of the State to review security situation and other aspects including preparedness for the Assembly elections.
He had visited Kashmir on June 26 and 27 for review of security and arrangements for Shri Amarnath Ji pilgrimage.