JAMMU, July 30: Top Seed Navalgund Niranjan of Karnataka emerged sole leader at 6.5 after the conclusion of 7 rounds in the ongoing Jaiveer Singh FIDE Ratings Chess Tournament at International DPS School Bathindi, here.
Garv Gaur of Haryana, Hemanth Raam of Tamil Nadu and Sparsh Khandelwal of Haryana were following the leader at 6 points each.
At joint 5th position were SP Sharma, Ashutosh Jamwal and Ravi Sharma of J&K and Manoj Kumar of Himachal Pradesh.
The events are being organized by Crown Trust under the banner of All J&K Chess Association under the guidance of Atul Kumar Gupta, President AJKCA.
Raj Kumar, DySP Prosecution is Organizing Secretary of this event.
Two more rounds are still to be played in this championship in which 120 players are fighting for the top honours.
There is lot of enthusiasm among young players of J&K particularly who are playing for getting FIDE Ratings.
Today’s matches were played under the supervision of Baldev Raj. Nitin Shenvi International Arbiter is the chief arbiter of this event while Anil Kotwal, Bindu Pathania, Sumit Grover are assisting him.
Taranvir Singh, Kuljeet Singh Jamwal,Vikas Nanda, Dr AS Bhatia and Rakesh Gupta were also present on the occasion.
“80 players from Jammu and Kashmir are participating in this tournament.
Total 9 rounds will be played under FIDE Laws of Chess,” said Mr Atul.
Madhu Abrol is coordinator of this event while Suminder Singh MD International DPS School is personally monitoring all the arrangements.
This is the 13th All India level event by All J&K Chess Association.
The event is being held in the memory of Master Jaiveer Singh Gujral, a promising chess player of state who lost his life in tragic road accident few months back. 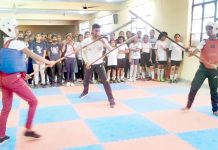 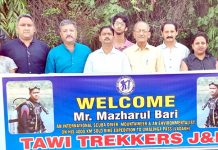 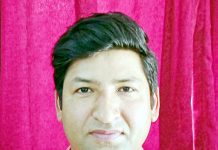