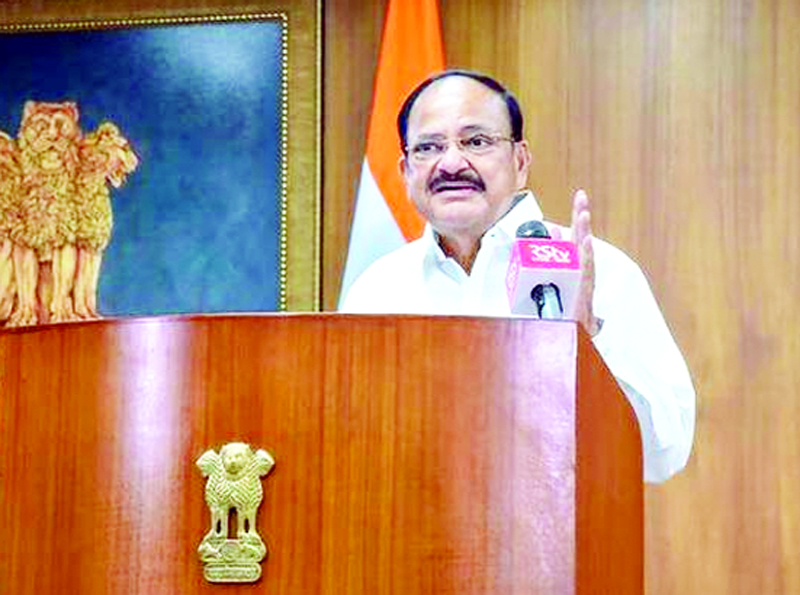 NEW DELHI, Aug 7:
Vice President M Venkaiah Naidu on Friday urged young IAS officers to treat their vocation as a mission to bridge the rich-poor, and urban-rural divides and be pro-active change agents in building a “new India”.
Addressing the valedictory ceremony of the two-year training programme for IAS officers of 2018 batch at Lal Bahadur Shastri National Academy of Administration through video, he said the socio-economic upliftment of marginalised sections should be their main goal.
Reminding the officers that Sardar Vallabhbhai Patel dreamt of a civil service that would work zealously to create a new nation by fighting poverty and discrimination, the vice president asked them to be honest, disciplined, simple, responsible, transparent and accountable.
Calling former prime minister late Lal Bahadur Shastri as a remarkable leader, Naidu said his hallmarks were integrity and humility, empathy and quiet efficiency, national pride and indomitable courage.
Urging the officer trainees to keep learning, thinking and innovating, Naidu said “good governance is what we need today”.
He stressed that governance has to be lean but efficient with a system that is transparent and responds to people’s needs and aspirations. It has to be a system that delivers and creates conditions for growth and development.
The vice president said legislature may make a number of policies and laws, but ultimately it is the actual implementation of those policies on ground that matters.
A government will be remembered by the delivery of the services, he underlined and said that it was the duty of civil servants to ensure that people get their entitlements without delay.
Whatever post you hold, you should create a record in good work so that people will remember you later, he told the young civil servants.
Stating that Sardar Patel had great faith in teamwork, Naidu advised the civil servants to develop teamwork by motivating their co-workers and subordinates to serve the people.
He said Prime Minister Narendra Modi’s mantra of ‘reform, perform and transform’ could be an inspiring backdrop for all their actions as they start innovating and becoming better than the best governance leaders in the world.
Observing that India is at the cusp of a significant transformation, he said that despite the current disruptive pandemic, there are a number of new opportunities for growth and self-reliant, resilient development.
“You will have to take the lead in unfolding this new India,” he asserted.
He said the new India will be based on unleashing the forces of inclusive growth, enhancing the quality of life, deepening democratic traditions and strengthening institutions of public delivery.
Advising the young officers to remember Mahatma Gandhi’s talisman when in doubt, the vice president told the officers that they would be able to make the right choice if they possess a dispassionate commitment to basic values of truth, fairness, justice, inclusion, public welfare and environmental protection.
Pointing out that the world was changing in unpredictable ways, he wanted them to anticipate the changes and prepare to address the emerging challenges.
“Nothing is static and an administration that seeks to fulfill the aspirations of the people has to always remain dynamic,” Naidu said.
Emphasising that the language of administration should be the local language of the people, he appreciated the officers for learning local languages during their training.
The vice president also released a book, titled “Sixty-five Conversations” containing ‘Mann Ki Baat’ addresses of the prime minister, brought out by the Academy. (PTI)