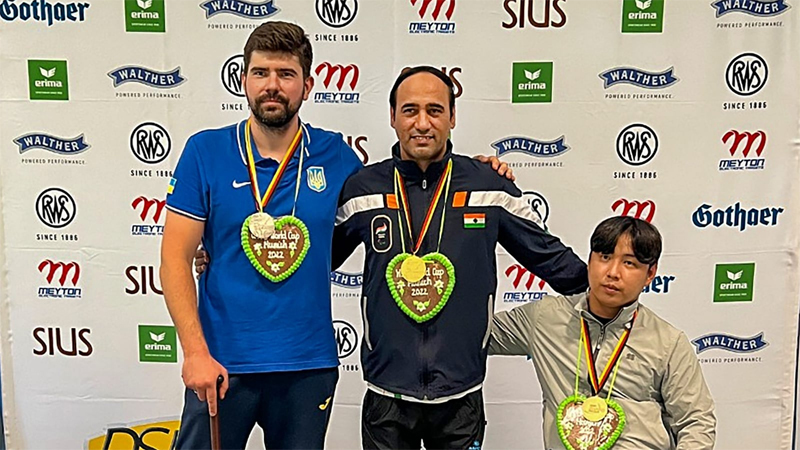 Paralympic medallist Singhraj Adhana won two gold medals on the final day as India produced their best-ever performance at the Para Shooting World Cup, finishing with 10 medals here.
Singhraj’s twin medals propelled India to the top of the medal table, their best performance since taking part in the competition for the first time in 2017. In total, India won six golds, three silvers and one bronze.
France (11) and Ukraine (15), took the second and third place, having won 4 and 3 gold respectively.
On the final day of the event, Tokyo Paralympic silver medallist Singhraj, who initially qualified in the fourth place, rode on his steady rounds of shooting to score 224.1 points and eventually clinched the gold.
Ukraine’s Oleksiy Denisiuk, settled for silver with 216.2 points, while Korea’s Jeongdu Jo won bronze after scoring 193.9.
Before the individual event, Singhraj teamed up with compatriots Deepender Singh and Manish Narwal to take the team gold.
The individual gold was also Singhraj’s first ever in the P4 event after several silver and bronze medals.
“I am very happy to finally win a gold in this event. I wanted to win it in Chateauroux 2022 in France but had some technical glitches. I am happy that I could execute my plans in Munich,” Singhraj said in a release.
“I would like to thank my coaches for the success.”
Earlier, India started off its Para Shooting World Cup campaign on a brilliant note with Rahul Jakhar clinching gold in P3-Mixed 25m Pistol SH1 event.
Jakhar also combined with Singhraj and Nihal to take the team gold with a total of 1695-36x ahead of Korea and the Czech Republic.
Shooters Manish Narwal and Rubina Francis followed it up with another gold in P6 – Mixed Team 10m Air SH1 Pistol event.
The Indian Para Shooting team will next be in action at the World Championships in November slated to be held in Al Ain, UAE. (PTI)