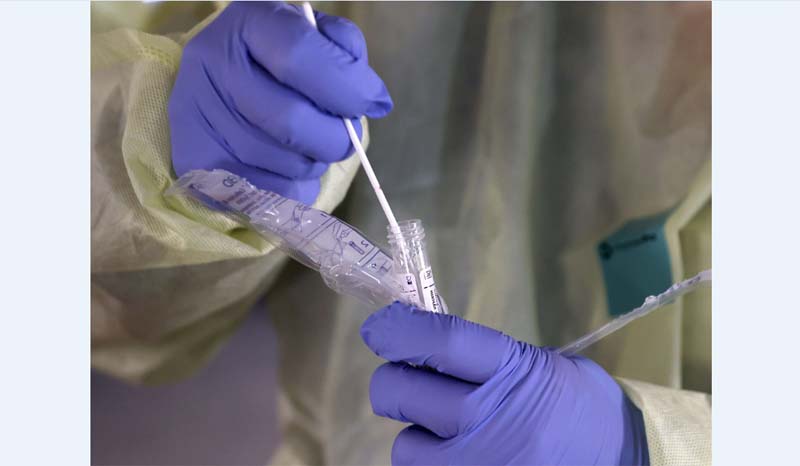 JAMMU, Mar 30: Due to sudden surge in suspects of COVID-19 cases in Jammu province in last few days, Microbiology team of Government Medical College (GMC), Jammu is working under intense pressure to conduct COVID-19 tests timely and on the same day with its limited testing capacity and trained personnel.
Official sources told Excelsior that COVID-19 testing must be done in a BSL-3 lab but as it is yet not ready in GMC Jammu, testing for the dreaded virus is being done in centrally funded BSL-2 lab of Microbiology Department which does not have adequate testing capacity due to lack of proper infrastructure and trained lab personnel.
The existing capacity of the GMC team is only 40 samples per day but in last two-three days several suspects of COVID-19 have been traced out in Rajouri, Udhampur, Samba and Jammu districts and they all need to be tested immediately.
Yesterday GMC Jammu received about 54 samples and eight the other day were already pending but with limited trained staff and in the absence of BSL-3 lab, the institution is feeling helpless while there is mounting pressure of the higher authorities to conduct the tests and do their reporting the same day.
They lamented that despite adequate funding and lapse of about five years even after its announcement, the administration of GMC Jammu has failed to establish BSL-3 lab while the same is functional in Kashmir since 2017 although both the labs were announced simultaneously.
“Had there been BSL-3 lab and more trained staff, we would not have to faced any problem in conducting tests as its capacity will have almost doubled and we don’t have to go guarded as we are going presently in BSL-2 lab,” a microbiologist of the Institution said on the condition of anonymity.
We need to increase capacity of our testing which is crucial for an appropriate response to the pandemic, he said, adding authorities recently established a testing facility at Command Hospital, Udhampur, and also succeeded in getting authorization for the same from Indian Council of Medical Research (ICMR) but they lack expertise and cannot do the test independently as it is not easy one.
“Though a testing facility has also been established at IIIM Jammu under the administrative control of GMC Jammu and adequate manpower is in place but Indian Council of Medical Research (ICMR) is yet to give authorization to this facility while availability of testing kits is another issue as ICMR has refused to provide more kits,” he regretted.
Meanwhile, sources said as number of suspected cases is increasing rapidly, the situation will worsen in the coming days if no other testing facility is made fully functional and the capacity of already existing BSL-2 lab of GMC Jammu is not enhanced and adequate trained staff provided.
When contacted, Financial Commissioner (FC), Health and Medical Education, Atal Dulloo said the testing capacity of existing GMC lab is 90 but due to want of trained staff they are presently conducting up to 40 tests and increasing their capacity gradually as this test needs trained personnel while the role of machine is limited.
He further informed that there is one more machine lying idle in GMC Jammu and instead of testing sample in its lab, which was earlier decided, the IIIM Jammu will now provide its trained manpower to operate this machine after which the testing capacity of GMC Jammu will go up to 180 samples per day.
Regarding functioning of testing facility at Command Hospital Udhampur, Dulloo said it is being made functional very soon as the lab is yet to get required reagents.