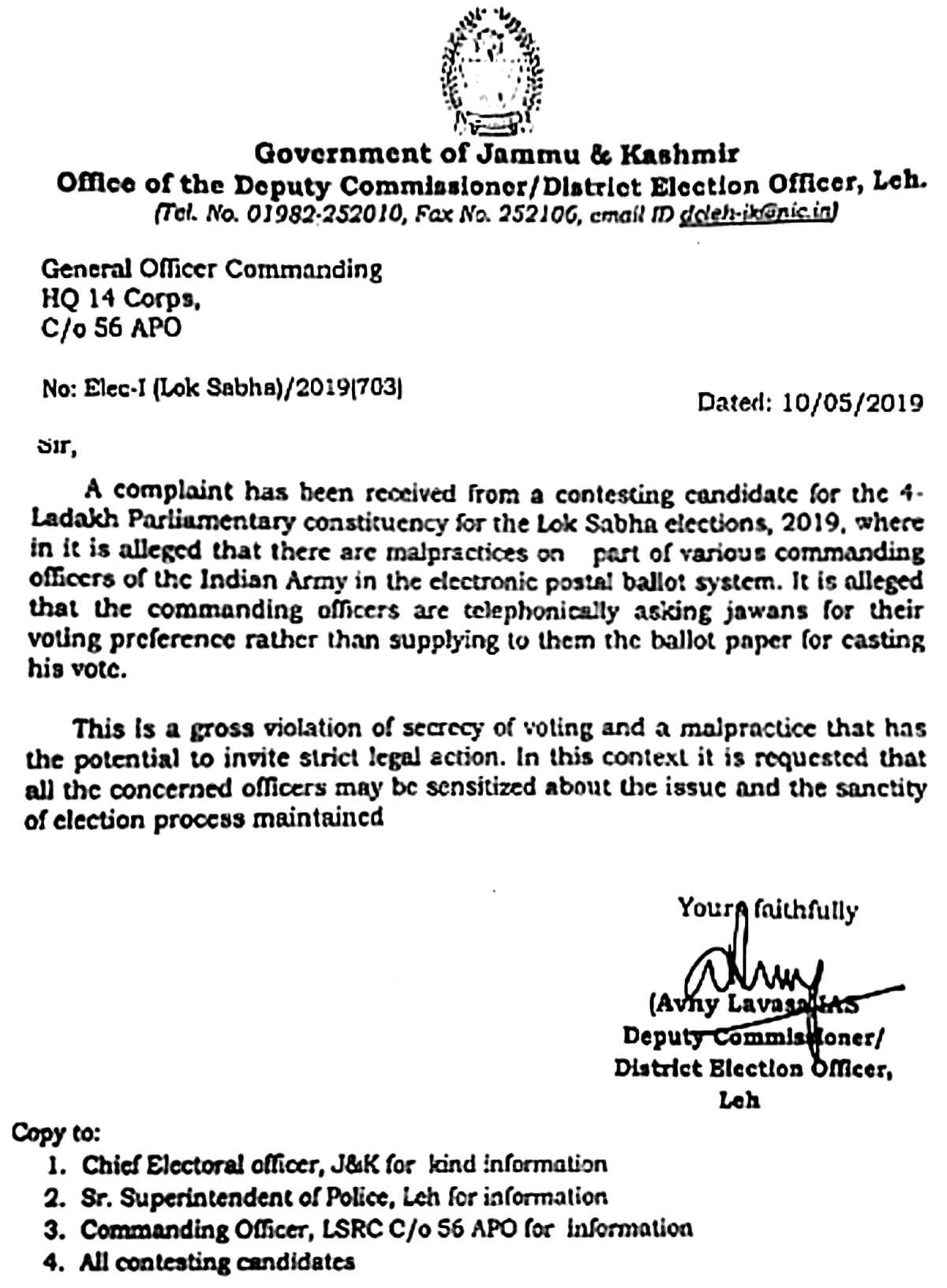 Concern over service voters, call to maintain sanctity
BJP dismisses charge, Cong cries foul
Sanjeev Pargal
JAMMU, May 10: Even as Leh was still to come out of bribery case involving senior leaders of the Bharatiya Janata Party (BJP), another major controversy has erupted over the casting of service voters with Deputy Commissioner, Leh, Avny Lavasa, who happens to be the District Election Officer (DEO) for Ladakh Parliamentary constituency, shooting off a letter to an Army Commander saying she has received complaint of malpractices on part of various Commanding Officers of the Indian Army in the electronic postal ballot system which has the potential to invite strict legal action.
Ladakh Parliamentary constituency has about 4000 service electorates. While about 900 service voters have been received so far by the Returning Officer, the rest were awaited. The service voters can be received by the Returning Officer till 8 am on the day of counting i.e. May 23.
The Deputy Commissioner-cum-District Election Officer, who had directed for registration of First Information Report (FIR) against the BJP leaders following court order in case of offering bribes to journalists in Leh, has stated in the letter that the Commanding Officers are telephonically asking jawans for their voting preference instead of supplying ballot papers to them.
Copy of the letter, written by Avny Lavasa to the General Officer Commanding (GOC), 14 Corps, which has been headquartered at Leh, a copy of which was in possession of the Excelsior, called upon all the Army Commanders to sensitize all the concerned officers about the issue and maintain sanctity of the election.
“It is alleged that there are malpractices on part of various Commanding Officers of the Indian Army in the electronic postal ballot system. It is alleged that the Commanding Officers are telephonically asking jawans for their voting preference rather than supplying them the ballot paper for casting vote,” Avny Lavasa’s letter to the GOC, the copies of which have also been forwarded to the Chief Electoral Officer, Jammu and Kashmir, Senior Superintendent of Police, Leh, Commanding Officer, LSRC Leh and all contesting candidates, said.
The District Election Officer has cautioned that the allegations have the potential to invite strict legal action.
“This is a gross violation of secrecy of voting and a malpractice that has the potential to invite strict legal action. In this context, it is requested that all the concerned officers may be sensitized about the issue and sanctity of election process maintained,” Lavasa said.
When approached for comments, Lavasa confirmed having written to the Army Commander and described it as “pre-emptive move”. She said she had received complaints verbally from one of the candidates to this effect.
“I don’t say that this has been happening,” Lavasa said and added that the letter was meant to aware them (the Army).
BJP candidate from Ladakh constituency, Jamyang Tsering Namgayal said the Opposition parties especially the Congress have sensed their defeat and were indulging in “futile exercises”, only to gain excused for their defeat.
“The Opposition has sensed the defeat and are indulging in lame excuses,” Namgayal said, describing the Army as “very disciplined force” which will never indulge in any illegal or unhealthy task. He charged the Opposition complaint as “sheer propaganda against Army”.
However, Congress candidate Rigzin Spalbar justified the complaint saying the BJP and its allies had captured booths in Zanskar and rigged the elections and, therefore, they can go to any extent to claim victory.
It may be mentioned here that Leh was already facing major controversy following allegations that the BJP leaders had offered bribes to journalists after a press conference at Press Club Leh. A FIR in this regard has already been registered against BJP MLA Vikram Randhawa at Leh police station on the Court directions. The BJP has, however, denied the charge.
Meanwhile, Defence Public Relation Officer (PRO) Srinagar said the complaints were received form Independent candidates Sajjad Hussain and Asgar Ali Karbalai regarding postal ballots to be cast by service personnel.
“No specific instances have been mentioned in the complaints,” he said. However, the Defence PRO said, these have been brought to the notice of the Army authorities who have been requested for sensitizing the concerned officers about the procedures prescribed in this regard by the Election Commission.
Army sources, however, said preliminary investigations indicate that the complaints are unfounded and appear to have been made to tarnish the image of the force.
“An in-depth investigation by Leh Sub Area GOC is on to ascertain the details in the most impartial manner. Army remains apolitical and we hold this core value in letter and spirit,” a source said.