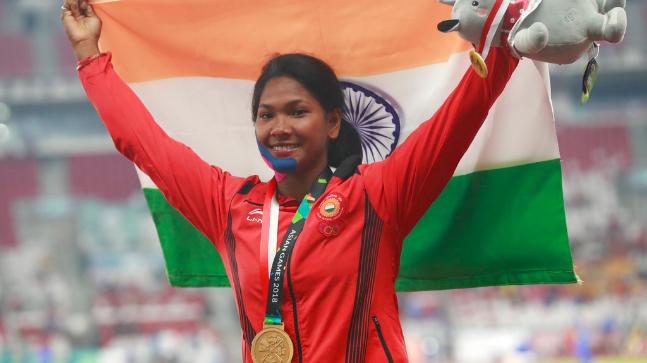 NEW DELHI: Swapna Barman may have become the first Indian heptathlete to win a gold at the Asian Games but she rues that she could not achieve her best in some of the events, which made the contest a tight one in the end.

“I could not do my best in high jump, 200m, 100m hurdles. High jump is the event I used to do the best. But it did not happen in Jakarta. Fortunately, I did well in javelin and that in a way compensated,” the 21-year-old Barman said in an interaction.

Shot put and long jump are the other two events in heptathlon.

Barman collected 6026 points, her career best, to win the gold. Her earlier best total from the seven events was 5942. The national record of 6211 still stands in the name of J J Sobha since 2004.

“6000 points is big but I could have done better. But I am happy to have won the gold in Asian Games in spite of so many injuries I have been carrying in the last one year and also during this Asian Games,” she added.

Barman competed in the two-day event with a taped right cheek to lessen pain arising out of teeth infection.

“The teeth problem arose two days before the competition and the pain was severe. I was having a slight knee injury also which I have been carrying since the Asian Championships in Bhubaneswar last year. But I never thought of dropping out of the event,” she said.

“Subhash Sarkar sir (her personal coach) told me to continue and I was determined to continue.” (AGENCIES)