E-Paper
Home Todays story LG for use of drones, other advance techniques to expedite work 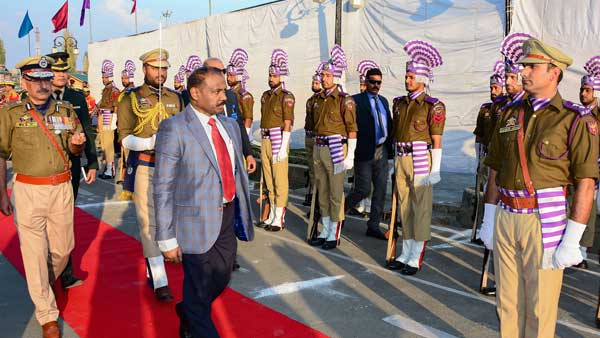 Mohinder Verma
JAMMU, Jan 28: In order to speed up activities under Digital India Land Records Modernization Programme in the Union Territory of Jammu and Kashmir, the Lieutenant Governor Girish Chandra Murmu has issued directions for exploring the feasibility of using drones and other high-tech techniques. Moreover, he has conveyed different timelines for completion of vital activities like establishment of State Data and Disaster Recovery Centres.
The Digital India Land Records Modernization Programme (DILRMP) of the Union Government was launched in Jammu and Kashmir from April 2016. Though DILRMP is a 100% Centrally Sponsored Scheme but it is being funded on “re-imbursement” basis only by the Government of India with effect from April 2018 onwards.
The project involves scanning of revenue documents/ maps; digitization of cadastral maps and integration; data entry/ digitization of the updated Jamabandies; setting up of Data Centres at State/ District/ Sub-District/ Tehsil levels with interconnectivity between revenue officers and respective Data Centres; conducting of survey/ re-survey; setting up of modern record rooms and training and capacity building of revenue field functionaries.
The progress under DILRMP was reviewed by the Lieutenant Governor Girish Chandra Murmu few days back and he was informed by the Financial Commissioner Revenue Dr Pawan Kotwal about the advancements made so far and the difficulties particularly with regard to availability of funds in carrying out various activities smoothly, official sources told EXCELSIOR.
For implementation, the DILRMP has been divided into three phases and Phase-I (survey and re-survey) work in Jammu and Srinagar districts is under execution presently. After threadbare discussion, the Lieutenant Governor directed that the work of survey and re-survey (settlement operations) should be taken up in all the remaining 18 districts in one go including the left over survey/re-survey work of Jammu and Srinagar districts with the use of high-resolution satellite imagery technique followed by ground-truthing by electronic total stations, sources said.
They informed that Lieutenant Governor has directed the Financial Commissioner Revenue and Information Technology Department to explore the feasibility of using drones for conducting survey/re-survey work wherever possible to expedite the work and the request for proposal should be recast accordingly.
“The Lieutenant Governor has also directed the Revenue Department to furnish consolidated requirement of funds for executing various components/ activities of DILRMP and also for rolling out computerized registration system in the Union Territory to the Finance Department, which has been asked to release funds as expeditiously as possible”, sources further informed.
It is pertinent to mention here that revolving fund is required to be created to execute various activities of the DILRMP as the funds under the programme are being released only on re-imbursement basis against the approved plan.
“The Government of India has released Rs 11.42 crore so far and the UT Government has released only Rs 3.78 crore against Rs 8.58 crore. Due to this the total work done liability is around Rs 4.78 crore and further work cannot be executed unless the pending share of Rs 479.75 lakh is released”, sources disclosed while justifying the creation of revolving fund.
They further disclosed that Lieutenant Governor has fixed different timelines for completion of various activities under DILRMP. For scanning of revenue documents, cadastral maps, digitization of cadastral maps of districts of Jammu and Srinagar and updation of Jamabandies and setting up of State Data Centre, the timeline is March 31, 2020.
For digitization of updated Jamabandies of districts of Jammu and Srinagar and setting up of Disaster Recovery Centre by the Information Technology Department, the Lieutenant Governor has fixed timeline of June 30, 2020. For rolling out of computerized registration system, the deadline is March 1, 2020. Similarly, time-frame has been fixed for other activities so as to ensure speedy completion of work under DILRMP.
Though DILRMP is also being implemented in the Union Territory of Ladakh but decisions about expediting the same are required to be taken by the Lieutenant Governor R K Mathur. “All the activities carried out under DILRMP in Leh and Kargil districts by the Revenue Department of the erstwhile State of Jammu and Kashmir has been shared with the concerned authorities of Ladakh”, sources informed.