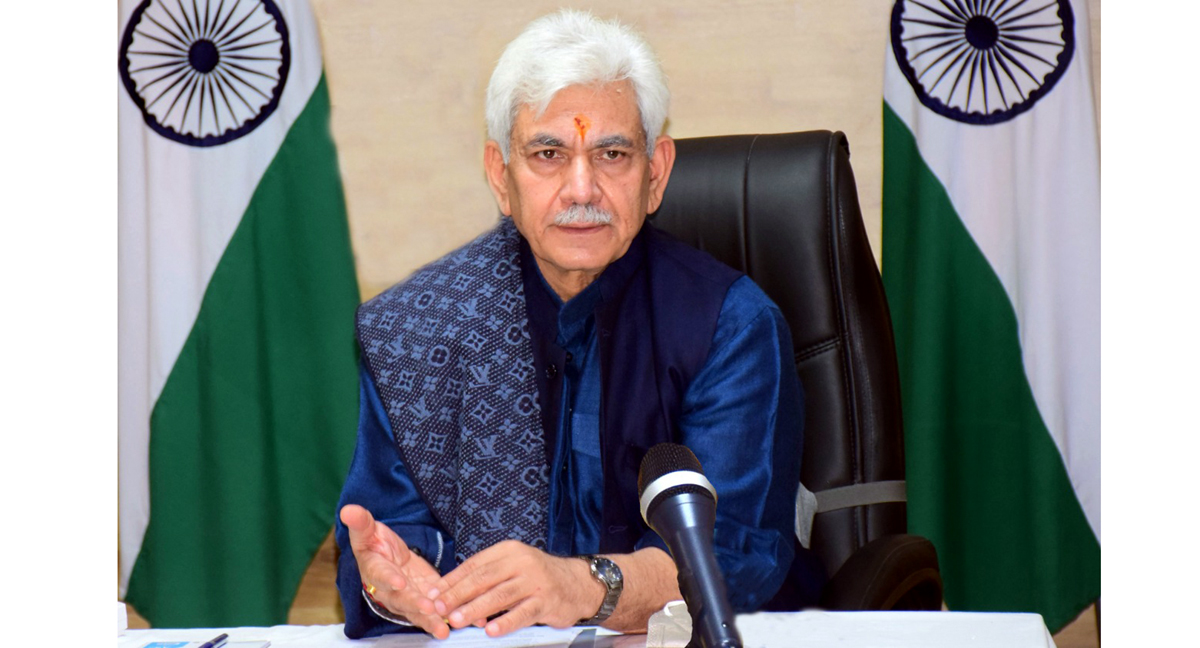 Lauds Deptts for round the clock services in harsh weather
Sanjeev Pargal
JAMMU, July 17: In a major boost for youth intending to join as ‘Agniveers’ in 3 Services, Lieutenant Governor Manoj Sinha today announced 10 percent reservation for them in Jammu and Kashmir Police and also agreed to consider suggestions for coaching to the aspirants.
He made the important announcement while addressing monthly ‘Awaam Ki Awaaz’ programme, which is aired on third Sunday of the month, on All India Radio (AIR)-Jammu and Kashmir today.
“Ten percent reservation to Agniveers will be implemented in Jammu and Kashmir Police,” Sinha said, adding he will also take up the suggestions for coaching facilities to the youth for ‘Agnipath’ scheme.
Sinha’s announcement came in response to the suggestions given by Jammu’s Sankarshan Sharma and Akshit Sharma.
Some other States including Haryana have already announced reservation for ‘Agniveers’ in their police and few other Departments. The Union Home Ministry has also announced similar reservations in some of the paramilitary forces.
Sinha commended role of the Jammu and Kashmir Police, security forces, NDRF, SDRF, administration and employees for saving many lives after cloudburst tragedy near Shri Amarnath Ji cave shrine.
“They have set an example by saving many lives and completing the operation,’’ he added.
Paying tribute to those who lost their lives in the tragedy, the Lieutenant Governor also appreciated role of the local people during tragedy and in the yatra who guided the pilgrims to safety besides rendering all other possible help.
“Pilgrimage has again started and I pray for all,” he said.
Sinha extended gratitude and commended employees of the Electricity Department, Road Construction, Jal Shakti Department and all other personnel associated with disaster management who defied recent inclement weather and ensured round the clock services and operations.
He appreciated the district administration of Kishtwar and Udhampur for strengthening good governance in their districts.
“District administration Kishtwar has been encouraging youth schemes while district administration Udhampur has generated awareness about BEAMS empowerment portal with which the people can get information about Government schemes being run in their villages,’’ the Lieutenant Governor said.
These beginnings, he added, will keep people informed and reduce gap between administration and people.
“Azadi Ka Amrit Mahotsav provides the perfect opportunity for new dreams, new resolve to bring about peace, prosperity and all-round progress in the country. As the cradle of civilization, we are determined to further enhance the country’s position at the world stage,” the Lt Governor said.
He acknowledged the indispensable efforts of the Water Heroes of Baramulla, including Mohammad Ramzan Wani, Abdul Ahad Reshi, Mushtaq Ahmed Dar, Riyaz Ahmed Mir, Ashraf Wani and Abdul Hameed Tantre who ensured water supply to 25 villages despite flash floods.
“There are many such officers and employees of the administration who are working round the clock with the resolve to serve the people. We acknowledge their dedication towards service; the work being done by them reflects their values and high ideals,” he added.
While enlisting Government’s endeavours for promoting entrepreneurship and harnessing demographic dividend, Sinha said, J&K has emerged as the top performer in the ranking of UTs for dynamic change in the ecosystem of StartUps. Through the new industrial policy, we are focusing on developing the start up ecosystem in the districts as well, he added.
100% banking facilities in all the villages is helping us to bring the remote villages closer to the markets of Delhi and Mumbai, he further added.
The Lt Governor made a special mention of women entrepreneurs from J&K who are inspiring other women folks with their resolve, efforts and achievements.
Saima Khan’s technology institute ‘Step in’, Madiha Talat’s ‘Shirin Aromatics’ and Malika Shah’s brand of herbal products have become synonymous with self-reliance, women entrepreneurship and empowerment, he said.
The Lt Governor noted that Geetika Kohli’s institute on soft skill training and Payal Sharma’s start up named ‘JK Aromatic Herbs’ are some of the shining examples of women empowerment, creative power and the very essence of excellence and leadership.
The Lt Governor thanked Umang Sharma from Jammu for invoking the contributions of the illustrious mathematicians of ancient India. She has suggested that life, accomplishments, and affect of such great personalities in shaping modern mathematics and astronomy should be taught in schools for a minimum of an hour per week.
The Lt Governor also shared the suggestions of Syed Aijaz Kashani from Srinagar and Baramulla’s Aaqib Tantray for promoting the culture of community policing as an effective medium of synergy between the people and the police.
Replying to an issue raised by Anantnag’s Rayees Ahmad Bhat pertaining to the garbage disposal in rural areas, the Lt Governor underscored the Government’s efforts to ensure Garbage Disposal Management in the villages through Jan-Bhagidari and directed Rural Development Department to examine the issue of setting up compost units.
On Mushtaq Ahmad Wani’s suggestion on revival and landscaping of water bodies in Budgam, Sinha said that Rural Development Department, elected public representatives and district administrations are working together to keep the water bodies clean and more people, volunteers, youth should join the movement.
The Lt Governor also shared insights received from Ganderbal’s Sheikh Minhaj and Kishtwar’s Hakim Singh for preparing a roadmap for identifying the young talent across the genres of performing arts and providing them with the right platform to harness their capabilities, and establishing a special cell in educational institutions through which all the villagers can be informed about Government schemes.